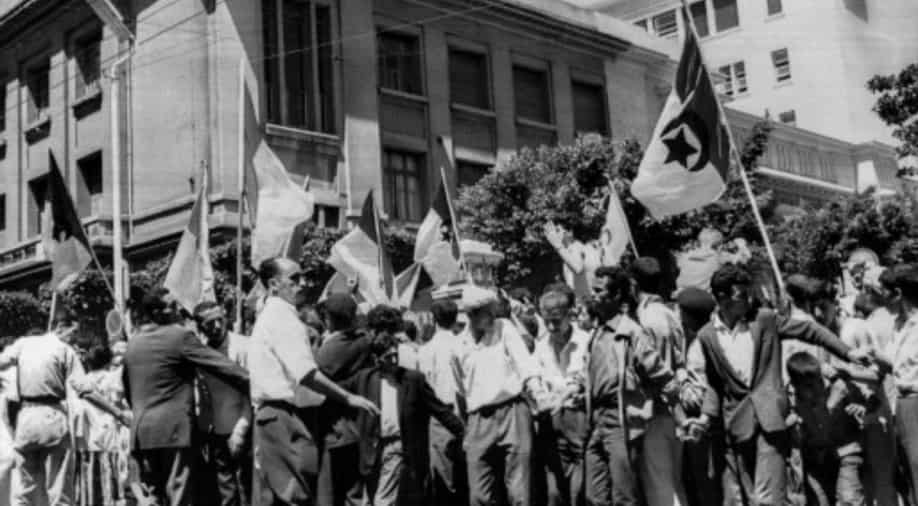 Algeria ultimately gained independence from colonial control on July 5, days after 99.72 per cent of its population supported it in a referendum. Photograph:( AFP )

This procession will be presided over by President Abdelmadjid Tebbonune, who will be accompanied by a number of international dignitaries, including Mahmud Abbas of Palestine, Kais Saeid of Tunisia, and Mohamed Bazoum of Niger

Algeria celebrates 60 years of its independence grom France on Tuesday (July 5) with a large military parade, but the tension between the two countries remains due to colonial era brutality. The gruelling eight-year war that brought freedom to the country was put to an end with the signing of the Evian Accords in March 1962. Authorities in Algiers on Friday closed a 16-kilometre (10 mile) stretch of a major artery so that the army could conduct final preparations for its parade, the first one in 33 years. Roads leading to the capital’s eastern suburbs have experienced severe backups as a result of the shutdown, AFP reported.

This procession will be presided over by President Abdelmadjid Tebboune, who will be accompanied by a number of international dignitaries, including Mahmud Abbas of Palestine, Kais Saeid of Tunisia, and Mohamed Bazoum of Niger.

The government commissioned a logo consisting of a circle with 60 stars, including icons and tools, to commemorate "a glorious history and a new ear."

Slah Goudji, speaker of the upper house in an interview published by newspaper L’Expression on Monday (July 4), said, "There's no way we can forget or erase the human genocide, the cultural genocide, and the identity genocide of which colonial France remains guilty," reported by AFP.

Algeria ultimately gained independence from colonial control on July 5, days after 99.72 per cent of its population supported it in a referendum. However, the 132-year occupation still has its impact on Algeria’s ties with France.

Thousands of people died during the battle for independence, but 60 years later, despite numerous overturns made by French President Emannuel Macron, France ruled out any kind of atonement for the colonial era.

Also read | US says Algerian at Guantanamo has been repatriated

The relationship between both countries reached a low point last year after Macron allegedly questioned Algeria if ever been as a country prior to the French invasion and accused its "political military establishment" of rewriting the history and inciting a hate towards France. In response to this, Algeria responded by removing its ambassador, but the relation between the two parties improved ever since then.

Both the presidents of the countries reaffirmed their intention to "deepen" their relationship over a phone call on June 18. The Algerian President also extended an invitation to French President Macron to visit Algiers.