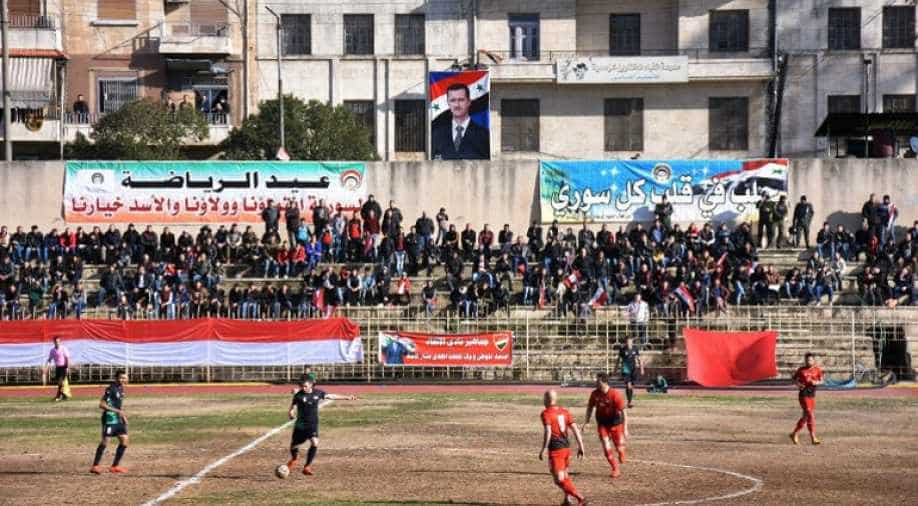 Syrians cheered excitedly in an Aleppo stadium on Saturday as they watched their first live football match in the war-ravaged city in years.

The Ittihad club beat Hurriya 2-1 in their first match on home turf since rebels took east Aleppo in 2012, dividing the northern city into a regime-held west and rebel-controlled east.

Police in full riot gear stood by as eager fans wearing winter jackets and woolly hats chanted their encouragements to their team on the dry grass pitch.

A large Ittihad banner draped in the stands featured an image of President Bashar al-Assad.

Fans were delighted to return to the stadium after years of war, despite having lost friends who had been killed or fled Syria during its nearly six-year war.

"The last match I went to was in 2010," said Mohammed Ali, who appeared to be in his early thirties, his hair slicked back and beard neatly trimmed for the occasion.

"Of course there were a lot more of us then. I was with my friends. Now some of them have travelled and others died," he said, sporting his team's red and black jersey.

Fans were delighted to return to the stadium after years of war. (AFP)

More than 310,000 people have been killed and millions have fled their homes in the conflict since it erupted with the brutal repression of anti-government protests in 2011.

Since 2012, Ittihad and Hurriya had only ever played games in other parts of Syria. Earlier games this season for both teams were held in the regime coastal stronghold of Latakia.

"We had started feeling a bit desperate because no match was ever held in Aleppo," Ghassan Mahmoud, another supporter in a leather jacket, said before the kick-off.

"But now security has returned, we hope the club's crowds will slowly come back to the stands," he said, standing next to a fellow fan in a Syrian-flag-themed outfit and beanie hat.

"We had started feeling a bit desperate because no match was ever held in Aleppo," Ghassan Mahmoud, a supporter in a leather jacket, said before the kick-off. (AFP)

As they warmed up outside in their tracksuits before the match, the Ittihad team's bright red and black shirts hung on hooks in the changing room.

"I can't tell you how it feels to return to the pitch (in Aleppo) after five years," said Ittihad player Omar Hamidi before the game.

Bakri Turab, another player, said he had "been waiting for this moment for years".

Fans cheered as Ittihad took to the field to play their black-clad rivals, with young boys dressed in green looking on from the touchlines.

Maher Khayata, deputy head of the general sports union, this week said the game was "a first step towards Aleppo clubs returning to play on home ground, waiting for pitches to be ready".

But so far no other game has yet been scheduled in Aleppo.

With games played previously all over the country, the Syria League was suspended after the conflict erupted nearly six years ago.

In 2012, matches resumed in a reduced format and only in only the regime-held cities of Damascus and Latakia.

A National Football Federation official last month said Syria League games would now return to the central cites of Homs and Hama after they were deemed safe.