Aleppo: After 5 years of war, a Christmas celebration 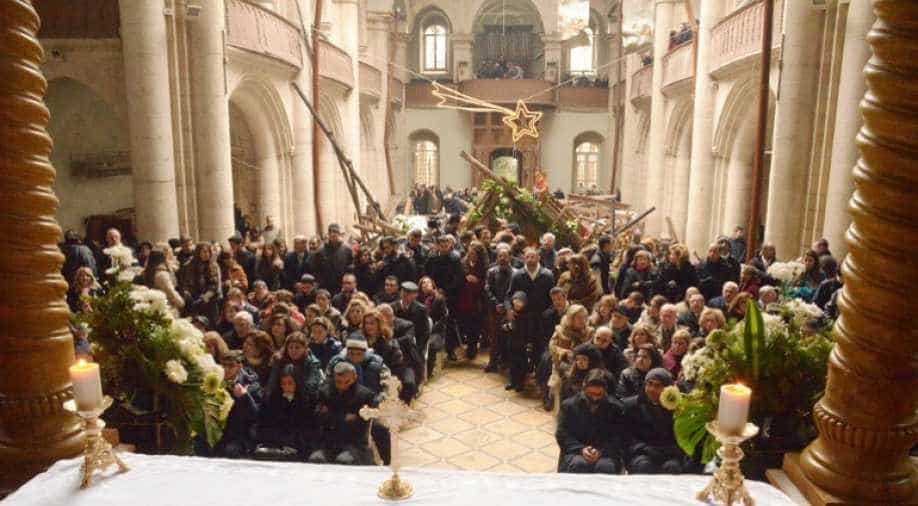 Many Syrian Christians supported the government in the civil war, viewing Assad, a member of a Shi'ite-derived minority sect, as a protector against rebel fighters mainly drawn from Syria's Sunni Muslim majority. Photograph:( AFP )

Christians in Aleppo celebrated under a giant Christmas tree lit up for the first time in five years, hailing what many described as the return of peace to a city that came back under full government control last week.

The fall of rebel-held east Aleppo was the biggest victory of Syria's nearly six-year-old civil war for supporters of Syrian President Bashar al-Assad, and many in pro-government parts of the city have been jubilant.

However, the rebel defeat has also brought severe hardship on civilians who fled from insurgent-held areas, thousands of whom have been forced to camp in wilderness under the snow. Aid groups say many are in peril and children have died from exposure to severe winter weather.

In the war-ravaged St Elias Cathedral located on what was long the frontline in Aleppo's historic Old City, priests prayed for peace at the first Christmas Eve Mass for five years, attended by dozens of worshippers, including some Russian officers.

He said the numbers attending mass across the city had surged, now that worshippers no longer feared missiles from rebel-held areas.

Many Syrian Christians supported the government in the civil war, viewing Assad, a member of a Shi'ite-derived minority sect, as a protector against rebel fighters mainly drawn from Syria's Sunni Muslim majority.

In the comparatively undamaged parts of the city that had long been held by the government, restaurants were thronged by Christians late into the night.

Hundreds of people danced and celebrated in the Azizya neighbourhood, where the public Christmas tree had gone unlit since rebels took the eastern half of the city in 2012. Giant posters depicted Assad and his Christian ally, Russian President Vladimir Putin.

In live footage shown on state television, a woman identified as the mother of slain Syrian soldier carried her son's picture alongside an image of the Virgin Mary.

"I am sure his soul is in peace now because Aleppo has been liberated," she said.

Although some Christians stayed on the sidelines of the civil war, many saw the rise of Islamic State and other Sunni Muslim insurgent groups as a threat to the very existence of their communities, some as old as the bible. The Christian population of Aleppo has shrunk since the start of the conflict to around 50,000 from 250,000 according to Bakhash.

Outside the city, rebels still hold at least 40 per cent of Aleppo province, and rebels have still fired sporadic shells from the fringes of the city to the south.

Russian jets resumed heavy strikes on rebel-held rural areas of Aleppo province after a pause during a ceasefire to complete the evacuation of rebels from the city.

A bombing raid in the rebel-held town of Atareb in western Aleppo countryside killed at least seven refugees who had fled from the city under the evacuation deal, a local resident said.

Some people who fled east Aleppo earlier in the war have begun returning to inspect homes in neighbourhoods reduced to rubble by years of aerial bombing, which intensified last year when Russia joined the war.

The army and pro-government militias are still combing parts of east Aleppo. Rebels accuse the pro-government forces of carrying out summary executions of scores of youths who stayed behind, and say looting has been rampant. The government denies its forces have executed prisoners or looted homes.

Thousands of people who were bussed out of Aleppo's rebel-held eastern districts as they fell to government forces have ended up in makeshift camps exposed to severe winter weather.

Many left everything behind as they fled under the evacuation deal, under which only mostly elderly people stayed.

"We brought a few belongings just to wear.. We lost everything," Omar Sarout, 55, told Reuters by internet message from a makeshift camp for more than 700 people, mostly women and children, run by Turkish and Gulf charities.

Yousef Hanbali, a carpenter who fled Aleppo for a makeshift camp in Idlib province, said his family hoped to reach Turkey to find work. "We need money. We left without anything," he said.