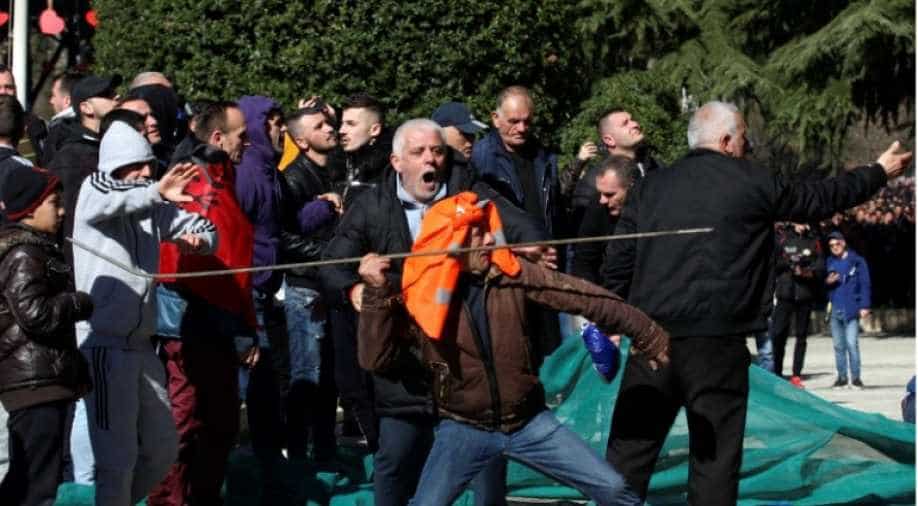 Supporters of the opposition party protest in front of a government building that houses the office of Prime Minister Edi Rama in Tirana, Albania Photograph:( Reuters )

Several people, including journalists, were hurt as police fired tear gas to push back the protesters, some of whom were residents angry over the planned demolition of homes to make way for the highway around Tirana.

Protesters in Albania attacked the prime minister`s office with iron bars and petrol bombs on Saturday, demanding his resignation over a scandal-plagued plan to build a ring-road around the capital.

Several people, including journalists, were hurt as police fired tear gas to push back the protesters, some of whom were residents angry over the planned demolition of homes to make way for the highway around Tirana.

During four hours of unrest, they attacked two large art installations outside the office of Prime Minister Edi Rama, an artist and former basketball player elected in 2013.

Saturday`s unrest erupted after a group of protesters broke away from a rally by several thousand opposition demonstrators who had gathered earlier in the day to demand Rama step down and call an election.

The European Union and its member states called on all sides "to do their utmost to avoid violence and further unrest".

Rama has faced mounting pressure in recent months. The ring-road scheme has been halted due to allegations of corruption in the awarding of contracts, leading him to sack the transport minister.

Prosecutors are investigating how a company using falsified documents, whose manager is now a fugitive, received 18 million euros in state funds to be build a section of the road.

"The government was caught stealing, and should go" said opposition Democratic Party leader Lulzim Basha, accusing the government of inciting Saturday`s violence by allowing protesters to break through a police cordon. He vowed to resume the protest on Thursday.

Rama accused opposition leaders of stirring up the unrest because they feared an ongoing overhaul of the judiciary would hold many of them accountable for alleged wrongdoing.

The scandal over the road scheme followed protests by students calling for cheaper tuition fees in December.

Rama`s Socialist Party government has steered the economy back to growth, with an expansion of about four per cent in 2018, and the Balkan NATO-member country could start accession talks with the EU in mid-2019.

However, the benefits of economic growth are not reaching everyone and many Albanians continue to leave the country in search of jobs. The perception of corruption is on the rise, especially from public private partnerships also seen as a threat to public debt.