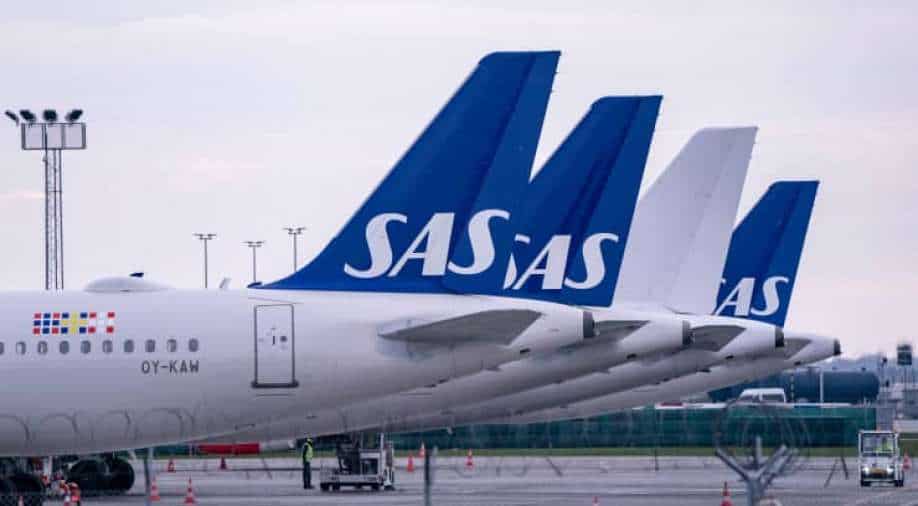 Scandinavian Airlines (SAS) Airbus A320 planes are parked at the Copenhagen Airport in Kaastrup, Denmark, on March 15, 2020. Photograph:( AFP )

The airline, whose biggest owners are Swedish and Danish taxpayers, said that the strike would have "a negative impact on the liquidity and financial position of the company and, if prolonged, such an impact could become material".

Scandinavian airline SAS has filed for bankruptcy protection in the United States to help cut debt, it said on Tuesday, piling pressure on striking pilots it blames for deepening its financial woes and sending its shares down 10%.

Wage talks between SAS and its pilots collapsed on Monday, triggering a strike that added to travel chaos across Europe as the peak summer travel season shifts into full gear.

Chief Executive Anko van der Werff said the strike had accelerated its decision to file for Chapter 11 status. But the negotiator for SAS' Danish pilots said the scope of the filing showed it had been months in the making and called attempts to blame striking staff for triggering it "beneath contempt".

The airline, whose biggest owners are Swedish and Danish taxpayers, said that the strike would have "a negative impact on the liquidity and financial position of the company and, if prolonged, such an impact could become material".

The strike will cost it $10 million to $13 million per day, the company said in its court filing. Sydbank analysts estimated that, in a worst-case scenario, it could erase up to half of its cash flow in the initial four to five weeks alone.

"The pilots may well consider themselves pieces in the puzzle that legalises the management's Chapter 11 request, and it's doubtful whether it will bring them back to the negotiating table," Sydbank analyst Jacob Pedersen said.

"On the other hand, the Chapter 11 request also shows how serious the situation is for SAS."

Experts say that entering Chapter 11 would make it easier for the company to lay off employees.

Swedish Airline Pilots Association Chairman Martin Lindgren said his members had seen it as inevitable the airline would need to embark on a "reconstruction".

"It does not affect the strike or our agreements," he said.

The airline said the US bankruptcy protection filing was aimed at accelerating a restructuring plan announced in February.

"SAS aims to reach agreements with key stakeholders, restructure the company's debt obligations, reconfigure its aircraft fleet, and emerge with a significant capital injection," it said.

SAS said discussions with lenders regarding another $700 million of financing were "well advanced".

The strike is grounding roughly half the airline's flights, affecting some 30,000 passengers per day, it said.

Data from flight tracking website FlightAware showed 232 SAS flights - 77% of those scheduled - had been cancelled on Tuesday, while Oslo's Gardermoen airport, one of SAS' hubs, had the world’s highest cancellation rate on the day.

SAS expects to complete the Chapter 11 process in nine to 12 months, it added. SAS shares can be traded as normal during the bankruptcy proceedings.

Wallenberg Investments, SAS's third biggest shareholder with a 3.4% stake, said it supported the decision and would allow for talks to continue to make the airline competitive.

"For decades, SAS has had too-high costs and too-low productivity compared to its rivals," it said.

SAS needs to attract new investors and has said to do that it must slash costs across the company, including for leased planes that stand idle because of closed Russian airspace and a slow recovery in Asia.

Its finance chief Erno Hilden said in the court filing the airline had so far been unable to renegotiate lease terms, many of which it said were "significantly above" market rates.

SAS had three bonds outstanding with a total face value of 5.4 billion Swedish crowns ($519 million). They now trade at deeply distressed levels of around one-third of face value.

The airline predicted its cash balance of 7.8 billion Swedish crowns was sufficient to meet its business obligations in the near term.

Sweden's government has said no to injecting more cash into the carrier, while Copenhagen has said it may do so if SAS is able attract new investors.

Nordnet analyst Per Hansen said the US application showed SAS needs a fresh start and that it thinks the strike will drag on. "Management and the board want to make it absolutely clear for all stakeholders that the situation is very serious."