Ahead of Trump's inauguration, US braces for anti-Trump protests 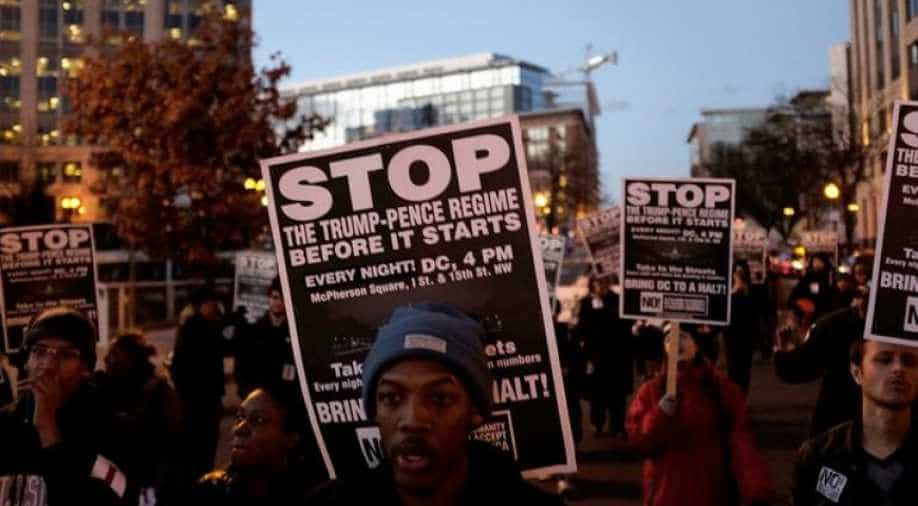 A protest group known as Disrupt J20 has vowed to stage demonstrations at each of 12 security checkpoints and block access to the festivities in Washington Photograph:( Reuters )

Washington has turned into a virtual fortress ahead of Donald Trump's presidential inauguration, with thousands of people set to take to the streets of New York to express their displeasure with his coming administration.

Some 900,000 people, both Trump backers and opponents, are expected to flood Washington for Friday's inauguration ceremony, according to organizers' estimates. Events include the swearing-in ceremony on the steps of the US Capitol and a parade to the White House along streets thronged with spectators.

The number of planned protests and rallies this year is far above what has been typical at recent presidential inaugurations, with some 30 permits granted in Washington for anti-Trump rallies and sympathy protests planned in cities from Boston to Los Angeles, and abroad in cities including London and Sydney. The night before the inauguration, thousands of people turned out in New York for a rally at the Trump International Hotel and Tower, and then marched a few blocks from the Trump Tower where the businessman lives.

About 28,000 security personnel, miles of fencing, roadblocks, street barricades and dump trucks laden with sand are part of the security cordon around 8 square km of central Washington. A protest group known as Disrupt J20 has vowed to stage demonstrations at each of 12 security checkpoints and block access to the festivities on the grassy National Mall. Police and security officials have pledged repeatedly to guarantee protesters' constitutional rights to free speech and peaceful assembly.

The rally featured a lineup of politicians, activists and celebrities including Mayor Bill de Blasio and actor Alec Baldwin, who trotted out the Trump parody he performs on "Saturday Night Live." "Donald Trump may control Washington, but we control our destiny as Americans," de Blasio said. "We don't fear the future. We think the future is bright, if the people's voices are heard."

"The concern is some of these groups are pro-Trump, some of them are con-Trump, and they may not play well together in the same space," Johnson said on MSNBC. Trump opponents have been angered by his comments during the campaign about women, illegal immigrants and Muslims and his pledges to scrap the Obamacare health reform and build a wall on the Mexican border.

The Republican's supporters admire his experience in business, including as a real estate developer and reality television star, and view him as an outsider who will take a fresh approach to politics. Bikers for Trump, a group that designated itself as security backup during last summer's Republican National Convention in Cleveland, is ready to step in if protesters block access to the inauguration, said Dennis Egbert, one of the group's organizers.

"We're going to be backing up law enforcement. We're on the same page," Egbert, 63, a retired electrician from Harrisburg, Pennsylvania.

Aaron Hyman, fellow at the National Gallery of Art, said he could feel tension in the streets ahead of Trump's swearing-in and the heightened security was part of it. "People are watching each other like, 'You must be a Trump supporter,' and 'You must be one of those liberals'," said Hyman, 32, who supported Democrat Hillary Clinton in the November election.

Friday's crowds are expected to fall well short of the 2 million people who attended Obama's first inauguration in 2009, and be in line with the 1 million who were at his second in 2013. Forecast rain may also dampen the turnout, though security officials lifted an earlier ban on umbrellas, saying small umbrellas would be permitted.