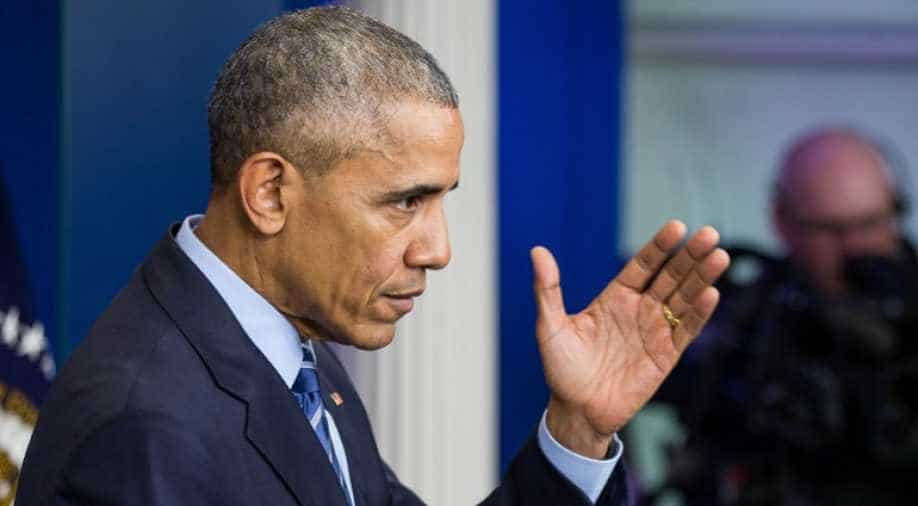 Critics of Obama's Middle East policy allege that he has long been manoeuvring to engineer an opportunity to isolate Israeli Prime Minister Benjamin Netanyahu. Photograph:( AFP )

It was only an abstention, but it was a long time coming. With just weeks left in office, Barack Obama finally gave vent to his frustration with Israel.

The White House said Obama had decided to allow the UN Security Council to pass a motion condemning Israeli settlement building just hours before the vote.

But officials confirmed they had been watching draft resolutions in circulation for a least a year and were ready to take a stand when one made it to the table.

Critics of Obama's Middle East policy allege that he has long been manoeuvring to engineer an opportunity to isolate Israeli Prime Minister Benjamin Netanyahu.

White House aides, however, insist they had simply run out of ways to convince Israel that its building on Palestinian land is sabotaging hopes for peace.

Either way, Friday's UN vote ordering a halt to Israel's settlement building will stand as the final word from Obama before Donald Trump takes power.

"Prime Minister Netanyahu had the opportunity to pursue policies that would have led to a different outcome today," Obama adviser Ben Rhodes said.

"The fact that this is happening towards the end of our eighth year indicates that it is not our preferred course of action.

"If it was an outcome that we sought, then we would have done it long ago."

For months, Washington has been warning in increasingly strident tones that Israel's accelerating settlement program is destroying hopes for a two-state peace deal.

This month, Secretary of State John Kerry told a US-Israeli forum in Washington that right-wing members of Netanyahu's government are deliberately working to that end.

After Friday's UN vote, the US special envoy to the peace process, Frank Lowenstein, said Kerry would in the coming days make a speech laying out ideas to revive it.

The White House insists the UN resolution, which Israel wasted no time in rejecting, simply reflects the consensus view of the international community on Israeli settlements.

But Obama's abstention came under withering criticism from across Washington -- with both Democrats and Republicans accusing the outgoing president of colluding with a biased world body to betray an ally.

President-elect Trump, who had earlier convinced Egypt to postpone the vote from Thursday, implied in a Tweet that he would punish the United Nations.

Democratic senator Chuck Schumer, who had lobbied the administration until the last minute, called the decision to let the vote pass "extremely frustrating, disappointing and confounding."

And AIPAC, the largest pro-Israel lobby group in Washington, said: "By adopting this resolution, the United Nations has once again served as an open forum to isolate and delegitimize Israel."

And many suggested Obama's decision, made while the president was on a Christmas break in Hawaii, had as much to do with his bad blood with Netanyahu as with diplomacy.

Jonathan Schanzer, vice president of Washington think-tank the Foundation for Defense of Democracies, dubbed the relationship a "grudge match."

Netanyahu made no secret of his friendship with Obama's 2012 election opponent Mitt Romney, and last year broke protocol to go behind the US president's back and address Congress to oppose the Iran nuclear deal.

The two men have never hit it off, and the White House has never hidden its frustration with the bellicose rhetoric of Israel's right-wing coalition.

Schanzer suggested that if Hillary Clinton had won last month's presidential election, Obama would have deferred to her desire to rebuild warmer ties with Israel and held off on UN action.

But, faced with an incoming Trump presidency that may support settlement building, he opted for a binding Security Council vote that will weaken Israel's position in any future peace talks.