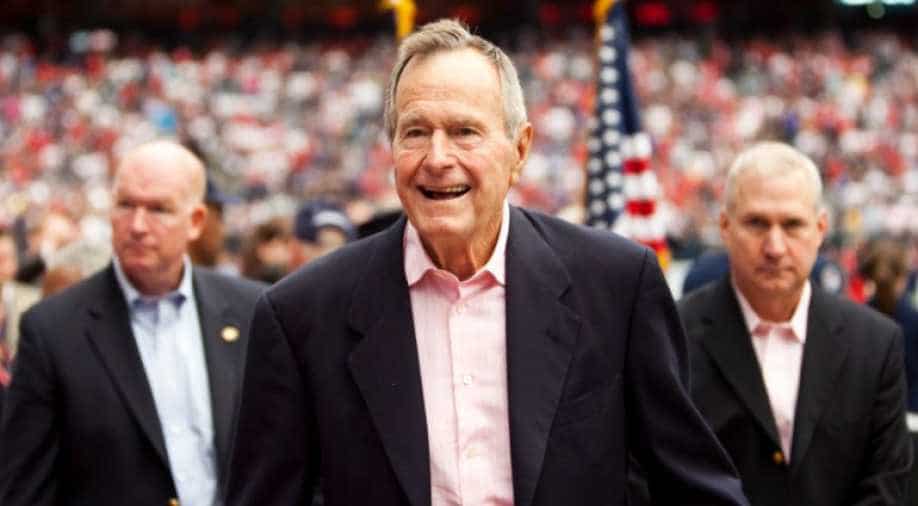 'President Bush would never ? under any circumstance ? intentionally cause anyone distress, and he most sincerely apologizes if his attempt at humour offended Ms. Lind,' a statement from a Bush spokesman said.?(Image source: Wikimedia Commons) Photograph:( Others )

Some media outlets reported that Lind, 34, accused Bush Senior of "groping her from his wheelchair" at a film screening.

Bush has issued a letter apologising for his behaviour.

The Daily Mail shared a screenshot of Lind's Instagram post in which she had shared the incident that reportedly took place at a promotional event for a television series, "Turn: Washington’s Spies". Lind reportedly deleted the post later.

The actress Heather Lind says Bush Sr groped her while he was in his wheelchair, and that 'Barbara (Bush's wife) rolled her eyes as if to say ‘not again’.'  (Facebook)

A Bush spokesman issued a statement with The Daily Mail and New York Daily News that apologised and described the former president's actions as an ill-judged attempt at humour, but did not deny that the incident actually took place.

“President Bush would never — under any circumstance — intentionally cause anyone distress, and he most sincerely apologizes if his attempt at humour offended Ms. Lind,” the statement said.

Lind wrote in her post: “He didn’t shake my hand. He touched me from behind from his wheelchair with his wife Barbara Bush by his side. He told me a dirty joke.”

Later on, as pictures were being taken, Bush repeated the act, Lind wrote while “Barbara rolled her eyes as if to say ‘not again’.”

More women and victims of sexual assault and harassment are speaking up from across the world about their experiences with the powers that be in film, entertainment and fashion industry after a string of complains against film mogul Harvey Weinstein surfaced.

Bush Sr's onstage appearance at a benefit concert to raise money the hurricane-ravaged southern US and Caribbean apparently prompted Lind to make this confession online.

“I found it disturbing because I recognise the respect ex-presidents are given for having served,” she wrote. “But when I got the chance to meet George HW Bush four years ago to promote a historical television show I was working on, he sexually assaulted me while I was posing for a similar photo."