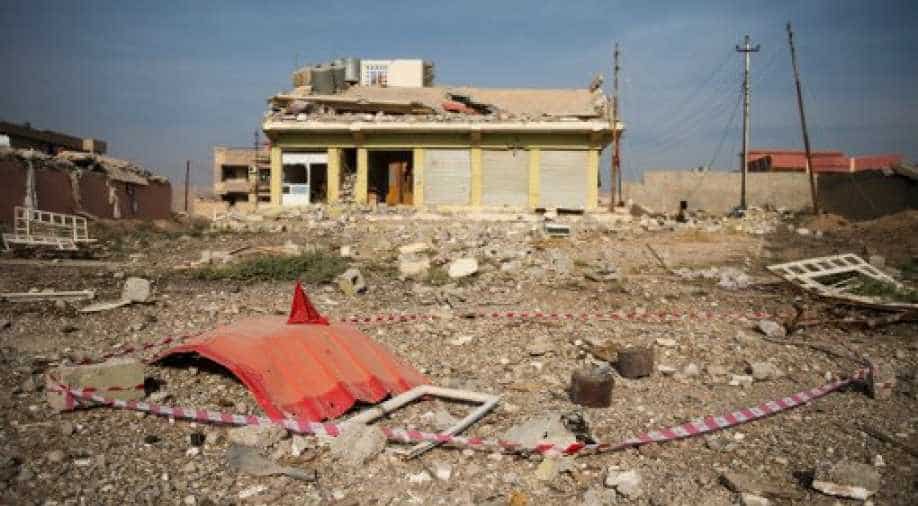 IS has hidden explosive devices everywhere --?inside homes, warehouses, sheepfolds, along the streets and?underneath haystacks. In photo: The site of a roadside bomb is cordoned off in the town of Bashiqa. (Representative image) Photograph:( AFP )

When Islamic State took control of large parts of Iraq in 2014, many people fled their homes fearing violence. Two years on, a coalition comprising Iraqi forces, the Peshmerga Kurdish forces, the Popular Mobilisation Units and several international forces have succeeded in reclaiming large swathes of the IS-held territory.

Many people now want to go back to their lives, their towns, their villages. They are itching to abandon the refugee camps or the temporary accommodations they currently live in and return to the safe confines of their homes.

However, the process is not easy and poses significant challenges.

Having been embedded with the Liwa al-Muntadhir for three days, it is clear that obstacles for people to return to their homes are both practical and cultural.

Liwa al-Muntadhir is affiliated to al-Hashd al-Shaabi, or Popular Mobilisation Forces (PMF), an umbrella organisation formed by Shiite Muslims who took up arms against Islamic State on the insistence of their spiritual leader, the Ayatollah Ali Sistani.

In a tiny hamlet, some 20 kilometres from Mosul and close to the small PMF base of Keherz, a de-miner clears the area of booby traps and improvised explosive devices (IED). “This man works day and night to clear the villages from bombs. Only today he found 35 rudimental bombs in two villages,” says one of the soldiers escorting us.

Explosive devices are hidden everywhere -- inside homes, warehouses, sheepfolds, along the streets and underneath haystacks.

It is not just explosives of that ilk that are giving de-miners sleepless nights. There are bombs hidden in the village that can detonate if someone uses a phone or a walkie-talkie in the vicinity. A phone call in the wrong place could easily cost someone’s life.

This small settlement was once home to a rural community, mainly shepherds. A little over 50 people resided here in the ten houses before IS came in. It is neither well-connected nor located in a strategic area, nevertheless, Islamic State’s fighters took time and effort to fill this place with explosives. This gives a clear idea of the level of danger the Iraqi army and the civilians face while getting close to the centre of Mosul, once home to a population of 2.5 million.

Bombs are not the only obstacle for people to return though -- and paradoxically, not even the most dangerous. Neutralising these devices is a risky and a time-consuming affair but once the bombs are defused, the problem is gone.

It is the religious and sectarian obstacles that are far more dangerous.

All areas surrounding the city of Mosul are mainly Sunni-dominant and the consistent presence of the al-Hashd al-Shaabi, a mainly Shia organisation, scares many inhabitants.

There is no official figure but the organisation counts on roughly 70,000 men and has claimed its right to participate in what could be the final step of the Iraqi war against the caliphate. It is an organisation made up of many minor groups. Some of them have a long history in Iraq and are directly connected with the Iran-backed Supreme Council for Islamic Revolution in Iraq (SCIRI).

Iraq's central government -- mainly consisting of Shia politicians -- has also been in direct touch with them and views the organisation as a legitimate force.

The impression is that of a political energy, originating from the religious majority of Iraq and aiming to establish its presence on the ground after more than thirty years of the Saddam Hussein’s Sunni-led dictatorship.

Al-Hasd al-Shaabi forces now have full control of territories in the south and west of Mosul. Their main goal is to occupy all roads leading to Syria, both to cut IS’ supply chain and to prevent them from entering the neighbouring country where Islamic State still controls a consistent area.

“We are going to finish Daesh (Islamic State) inside Iraq. We are going to bury them here, they will not go to Syria,” says the Liwa al-Munthadir unit commander Said Ahmed.

Their current operation is to weed out IS fighters from the town of Tal Afar, which is located on a highway leading to Syria and west of Mosul. Although the battle is currently on, al-Hashd al-Shaabi fighters managed to take over the town’s airport on the night of November 16.

From the town of al-Qayyarah to the city of Mosul, everything is under their control -- from the frontline to all law enforcement activities.

Many civilians who were living in Sunni-controlled areas are now under al-Hashd al-Shaabi's control, but people are now scared to go back to their villages, fearing sectarian violence.

During operations to reconquer other major cities under Islamic State control, especially Fallujah, members of the al-Hasd al-Shaabi had been accused by the United Nations to have committed heinous crimes against civilians who they believed had supported IS' caliphate.

“This is not true,” says the unit’s commander Said Ahmed. “Daesh commits all these crimes and then accuses us. They tell the civilians that we will burn their houses, but this is not true. We are here to protect everyone in Iraq, we are all Iraqis, be it Sunnis, Yazidis or Christians. We are here to fight Daesh, which for us is not (a) Muslim (organisation).”

Physical violence is not the only fear many Sunni Muslims have. There are other subtle forms of violence which are keeping them away. Living as a Sunni under a newly Shia-controlled town could make it difficult to find a good job or a good house, for instance.

The potential problems of coexistence between the two communities is a major challenge for the future of Iraq and, if mismanaged, could pave the way for a dangerous thirst for revenge within the many Sunni tribes living in the country.