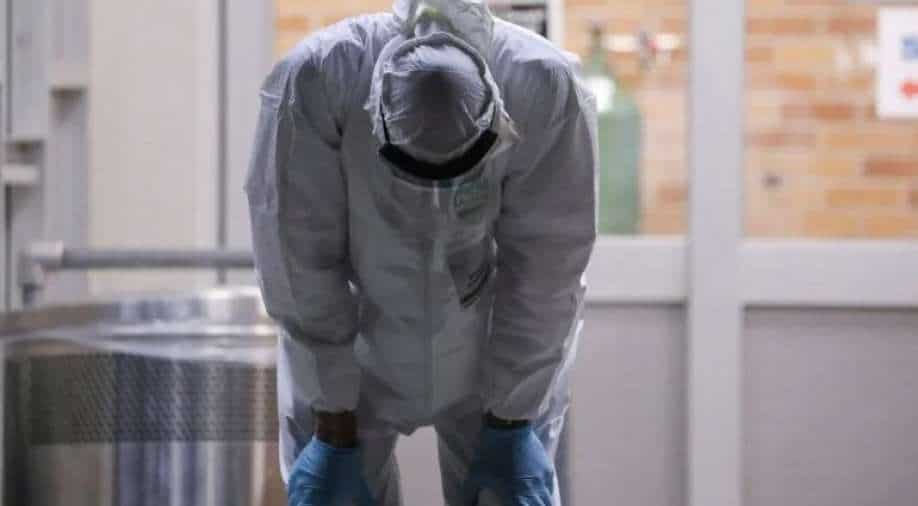 Now, a year into the pandemic, with emergency rooms packed again, vaccines in short supply and more contagious variants of the virus threatening to unleash a fresh wave of infections, the nation’s medical workers are feeling burned out and unappreciated

Dr. Sheetal Khedkar Rao, 42, an internist in suburban Chicago, can’t pinpoint the exact moment when she decided to hang up her stethoscope for the last time. There were the chaos and confusion of the spring, when a nationwide shortage of N95 masks forced her to examine patients with a surgical mask, the fears she might take the coronavirus home to her family and the exasperating public disregard for mask-wearing and social distancing that was amplified by the White House.

Among the final blows, though, were a 30% pay cut to compensate for a drop in patients seeking primary care, and the realization that she needed to spend more time at home after her children, 10 and 11, switched to remote learning.

“Everyone says doctors are heroes and they put us on a pedestal, but we also have kids and aging parents to worry about,” said Rao, who left her practice in October. “After awhile, the emotional burden and moral injury become too much to bear.”

Doctors, paramedics and nurses’ aides have been hailed as America’s frontline COVID warriors, but gone are the days when people applauded workers outside hospitals and on city streets.

Now, a year into the pandemic, with emergency rooms packed again, vaccines in short supply and more contagious variants of the virus threatening to unleash a fresh wave of infections, the nation’s medical workers are feeling burned out and unappreciated.

Over the last year, there have been the psychological trauma of overworked intensive care doctors forced to ration care, the crushing sense of guilt for nurses who unknowingly infected patients or family members, and the struggles of medical personnel who survived COVID-19 but are still hobbled by the fatigue and brain fog that hamper their ability to work.

Researchers say the pandemic’s toll on the nation’s health care workforce will play out long after the coronavirus is tamed. The impact, for now, can be measured in part by a surge of early retirements and the desperation of community hospitals struggling to hire enough workers to keep their emergency rooms running.

Some health care experts are calling for a national effort to track the psychological well-being of medical professionals, much like the federal health program that monitors workers who responded to the 9/11 terrorist attacks.

“We have a great obligation to people who put their lives on the line for the nation,” said Dr. Victor J. Dzau, president of the National Academy of Medicine.

As vaccinations ramp up, it is tempting to imagine that the pandemic’s horrifying effect on health care workers is poised to recede. But it is unclear whether vaccinated health care workers can still spread the virus to others and how the ever-changing variants will affect the effectiveness of the vaccines.

And while supplies of personal protective equipment have improved in recent months, health care workers in much of the country are still reusing N95 masks that were designed to be thrown away after each patient.

Celia Nieto, 44, an intensive care nurse in Las Vegas, said many Americans had scant appreciation for the tribulations that she and her colleagues face day after day. There is the physical exhaustion of lifting and turning patients on their bellies so they might breathe easier, the never-ending scramble to adjust ventilators and pain medication, and the mental anguish of telling relatives she doesn’t have the time to help them FaceTime with their loved ones.

“It feels like we’re failing, when in actuality we’re working with what we’ve got and we don’t have enough,” she said. “We feel quite helpless, and it’s a real injury to our psyches.”

Dr. Donald Pathman, a researcher at the University of North Carolina at Chapel Hill, said he was struck by the early results of a study he has been conducting on the pandemic’s effect on clinicians who serve in poor communities. Many of the 2,000 medical, dental and mental health professionals who have participated in the survey so far say they are disillusioned.

“There is a lot of personal trauma,” Pathman said. “Many people have been scarred by their experiences during the pandemic, and they will look to leave their practices.”

In interviews, doctors who have recently left the field or are considering early retirement said the pandemic had exacerbated frustrations spurred by shifts in the business of medical care that often required them to work longer hours without increased compensation.

In a survey released in September by the online site Medscape, two-thirds of American doctors said they had grappled with intense burnout during the pandemic, with a similar percentage reporting a drop in income. A quarter of respondents said their experiences with COVID had led them to exit the medical field.

Another survey, by the Physicians Foundation, found that 8% of doctors in the United States had closed their offices during the pandemic, translating to 16,000 fewer private practices.

“We put on our masks and come to work every day because we don’t have the luxury of working from home in our pajamas, but the apathy and ennui that’s taken hold of society just makes our job feel thankless,” said Bial, who works full time despite struggling with the lingering effects of her illness. “It’s so demoralizing.”

Staffing shortages have been especially acute at nursing homes and long-term care facilities. They were already struggling to retain employees before the pandemic, but many are now facing an existential shortage of skilled workers. According to a study released last week by the nonpartisan U.S. PIRG Education Fund, more than 20% of the nation’s 15,000 nursing homes reported severe shortages of nursing aides in December, up from 17% in May, a significant jump over such a short period.

As more and more medical staff members fall ill or quit, those who remain on the job have to work harder, and the quality of care invariably suffers, said Dr. Michael L. Barnett, assistant professor at the Harvard T.H. Chan School of Public Health who served as a consultant to the study.

“It’s a recipe for a collapse in the workforce,” he said.

So far, the federal government has shown little interest in addressing what Dzau, of the National Academy of Medicine, writing in The New England Journal of Medicine, described as a “parallel pandemic” of psychological trauma among health workers.

He and other experts say the government should start by making a concerted effort to accurately count medical worker infections and fatalities.

Thousands of health care workers have already paid the ultimate price for their workaday devotion. Since March, more than 3,300 nurses, doctors, social workers and physical therapists have died from COVID-19, according to a tally by Kaiser Health News and the Guardian.

Experts say the death toll is most likely far higher. The Centers for Disease Control and Prevention counts 1,332 deaths among medical personnel, which is striking given that its sister agency, the Centers for Medicare and Medicaid Services, lists roughly the same number of deaths just among nursing home workers — a small portion of those employed by the nation’s hospitals, health clinics and private practices.

A number of studies suggest that medical professionals made up 10% to 20% of all coronavirus cases in the early months of the pandemic though they comprise roughly 4% of the population.

Many medical workers who have survived COVID-19 face more immediate challenges. Bial, the pain specialist from Boston, is still plagued by fatigue and impaired lung function.

“The day before I got sick, I could comfortably run 8 to 10 miles,” said Bial, 45, who started a Facebook group memorializing doctors lost to COVID. “Now I go out for a brisk walk and my heart is pounding. I’m starting to wonder whether these effects could be permanent.”

Dr. Andrew T. Chan, a professor at Harvard Medical School and a gastroenterologist at Massachusetts General Hospital who has been studying the pandemic’s disproportionate toll on health care workers, said his preliminary research suggested that long haulers in the medical field suffer greater health challenges than the overall population. That is in part because they are often exposed to increased levels of virus, which can lead to more severe illness.

Another factor, he said, is that the worsening staffing shortages in much of the country lead many COVID survivors to return to work before they have fully recovered.

“If health care workers are not given the opportunity to fully heal after getting COVID and are subjected to the continued physical and mental stress of working through the pandemic, they are likely to experience a greater risk of long-term complications,” Chan said. “COVID could impact our health care system for years to come by not only depleting our workforce but by impairing the ability of survivors to do their jobs.”