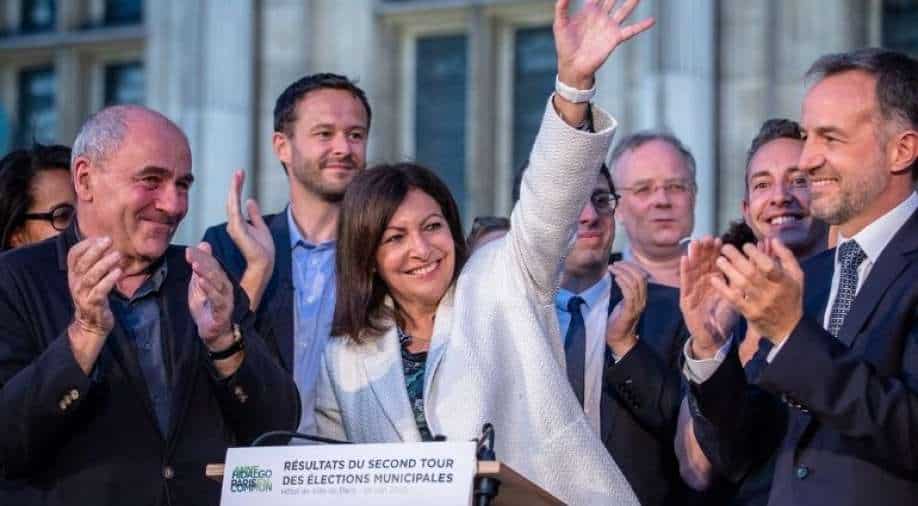 Anne Hidalgo, the incumbent mayor of Paris and member of the French Socialist Party, celebrates after winning the second round of the French municipal elections in Paris Photograph:( AFP )

With the elections approaching, the left, once a mighty force in French politics, is now largely in tatters, and many of its most familiar faces seem incapable of the one thing that both experts and supporters say offers the only possible path to victory: unity

The dismal state of the French left before April’s presidential elections was best encapsulated in a series of recent phone calls made by Arnaud Montebourg, a onetime Socialist government minister whose campaign for president has barely registered in the polls.

Montebourg posted several videos on Twitter of him making phone calls to four other left-wing candidates, all of whom are polling just as badly. It was an awkward last-chance bid to urge the Socialists, Greens, Communists and other leftists to unite behind a single presidential ticket or be crushed by the right and far-right in April.

No one picked up.

With the elections approaching, the left — once a mighty force in French politics — is now largely in tatters, and many of its most familiar faces seem incapable of the one thing that both experts and supporters say offers the only possible path to victory: unity.

In a country that is shifting to the right, the left has found itself voiceless on issues like security, immigration and national identity, and it has failed to capitalize on the wave of protests over the environment and social justice that should have provided an opportunity to gain support.

“The left is in a situation of unprecedented ideological fragility,” said Rémi Lefebvre, a professor of political science at the University of Lille. “In this context, being divided means suicide.”

But amid the ineffectual chaos, there is now a push for order.

Bypassing traditional party tactics, the “Primary of the People,” a burgeoning effort led by a group on the left that is exhausted by the parties’ factionalism and fragmentation, will hold a vote in January for supporters to choose a single candidate before the French electorate weighs in as a whole.

Current polls indicate why some on the left are looking for another way. Seven left-wing candidates are currently running for president, and all are polling in the single digits.

Together, the candidates account for what would be about one-quarter of the vote, or about 20 points lower than the French left a decade ago. The chance that any unified candidate from the left would pick up enough votes to reach the next round of the two-part race — to most likely face the incumbent, Emmanuel Macron — seems low.

But the effort to hold a January primary does offer the hope of a path toward a revived sense of relevance for the left. And it could potentially further disrupt a presidential campaign that has already been upended by the entrance of Éric Zemmour, a polarizing far-right writer and television celebrity, into the race.

“We’re talking about the left again — there’s some new pressure,” said Lefebvre, the political science professor. But he added that it remained unclear whether the momentum behind the primary would be enough to overcome the parties’ deep-rooted divisions.

The French left was long dominated by the Socialist Party and its social-democratic politics, but Macron’s victory in the 2017 presidential elections brought an end to the two-party system in which it had secured a comfortable spot.

The left is now an unruly mix, mainly divided between the Socialists, the Greens and the far-left France Unbowed — not to mention the constellation of small far-left parties that have emerged from the near-collapse of the Communist Party.

The leaders of the primary campaign went to work in January, negotiating for months with most of these parties to work out a common base of 10 proposals for social and climate justice, including an increase in taxes for the wealthy and ending the use of pesticides by 2030.

More than 300,000 people have signed on to the initiative, the equivalent of 40% of all left-wing party members in France. They will vote in January to nominate a candidate and have pledged to campaign on that person’s behalf.

But it will be a long road.

Until recently, left-wing parties had “scorned” the Primary of the People, seeing it as a competing force that could threaten their interests, Lefebvre said.

Samuel Grzybowski, a spokesperson for the effort, said his team had been under pressure from established parties to end the primary process, with some parties even offering to help them win seats in Parliament if they stepped aside from the presidential race.

“It’s long been Baron Noir,” he said, referring to a hit TV series that depicts the shadowy side of France’s political life — a French version of “House of Cards.”

Jean-Luc Mélenchon, the leader of France Unbowed, described the calls for unity as too late and “pathetic.” But slowly, the tide has started to turn.

Montebourg’s desperate calls attracted attention, and then Anne Hidalgo, the mayor of Paris and the Socialist Party’s candidate, whose support has dropped below 5%, acknowledged that the left was heading for a disaster.

“This fractured left, this left which today drives many of our fellow citizens to despair, must regroup,” she said on France’s most-watched news show early this month. “We must organize a primary,” she added, later voicing her support for the primary effort.

That was followed by a public letter urging parties to agree on a primary, following similar calls from members of various parties.

The movement got another lift when Christiane Taubira, a charismatic former justice minister under François Hollande, France’s Socialist president from 2012 to 2017, announced that she was “considering” running for president and that she would put all of her “strength into the last chances for unity.” The next day, she said the primary effort “seems to be the last space where this unity can be built.”

The move by Taubira is likely to add pressure on candidates who have so far balked at joining left-wing primaries, such as Yannick Jadot of the Greens. Minutes after Taubira’s announcement, Sandrine Rousseau, a leader of the Greens who is also campaigning for Jadot, said a “coalition of the left” was needed.

“The power balance just tilted in our favor,” Grzybowski said.

The appeal for a citizens’ primary has mirrored the growing disenchantment with traditional left-wing parties. Many on the left now regard the parties’ policies on social justice and an equitable economy as outdated. Some still consider the business-friendly policies of Hollande a betrayal.

“It’s no longer the political parties that drive the public debate,” said Hugo Viel, a 23-year-old engineering graduate and a volunteer for the Primary.

“It’s the social movements, the climate marches, #MeToo, the yellow vests,” he added, referring to the numerous protests that have recently upended France, on issues like economic inequality, racism and domestic violence.

But left-wing parties have had difficulty translating those protests into concrete proposals and broader support. They are disconnected from these social movements, have struggled to gain traction outside big cities and slipped into bitter infighting as competing strains of feminism and anti-racism from different generations clashed.

“This left is losing contact with the base,” said Michel Wieviorka, a French sociologist. “It loses the capacity to embody new social and cultural protests, and at the same time, the old unionized worker protests are also slipping through its fingers.”

Where it will all lead is unclear, but a poll taken this month showed that nearly three-quarters of the left-wing electorate now support the principle of a primary, and an average of about 8,000 people have joined the primary effort every day for the past two weeks, Grzybowski said.

Alain Coulombel, a member of the Greens’ leadership who supports the primary, lamented that the left was heading toward the elections without equipping itself with “all the weapons to win.” He estimated that the parties’ agendas converged on nearly 80% of the proposals.

All the French left has to do, he said, is “to put the puzzle together.”