A gathering political storm hits Georgia, with Trump on the way 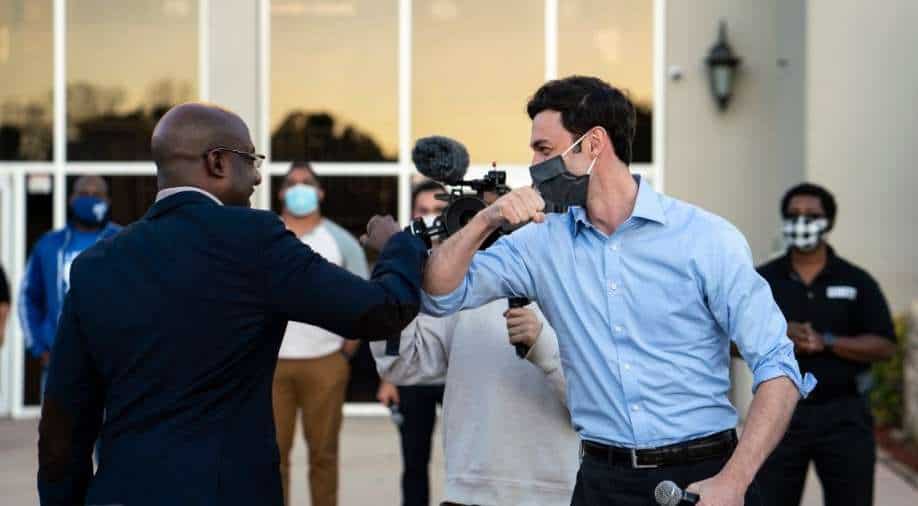 If both Republicans are defeated, control of the Senate will shift to Democrats just as Biden moves into the Oval Office

ATLANTA — Some of the biggest names in national politics jumped into the fiercely contested runoffs for two Georgia Senate seats Friday, even as a second recount showed that Joe Biden had maintained his lead in the state and Republicans braced for a visit by President Donald Trump, who has railed against his loss there with baseless claims of fraud.

With Trump set to campaign for the two Republican incumbents, David Perdue and Kelly Loeffler, on Saturday, Vice President Mike Pence and former President Barack Obama held dueling events to underscore the vital stakes in the special elections: If both Republicans are defeated, control of the Senate will shift to Democrats just as Biden moves into the Oval Office.

Obama appeared virtually at a turn-out-the-vote event for Jon Ossoff, the Democrat facing Perdue, and the Rev. Raphael Warnock, Loeffler’s opponent, and spoke of his frustration in seeing his initiatives blocked by the Republican-controlled Senate when he was in office. “If the Senate is controlled by Republicans who are interested in obstruction and gridlock, rather than progress and helping people, they can block just about anything,” Obama said.

Pence — with Perdue and Loeffler by his side — received a COVID-19 briefing at the Atlanta headquarters of the Centers for Disease Control and Prevention and said later at a rally for the Republican candidates that “we’re going to save the Senate, and then we’re going to save America.”

A second recount of the presidential vote in Georgia has finished, according to the Secretary of State website, showing Biden ahead by about 12,000 votes with 100% of the counties reporting.

New campaign financial reports filed late Thursday showed a staggering influx of money into the state in the first days of runoffs that were expected to set spending records, with more than $300 million booked in television, radio and digital ads, according to data from AdImpact, an ad-tracking firm. Media buyers said the price of ads was soaring, especially for super PACs, to unseen heights.

The Senate races are playing out at a hyperpartisan moment in American politics that has led to a civil war among Georgia Republicans divided over whether to support Trump as he persists with false assertions that the election was stolen from him. In Georgia and elsewhere, the president’s lawyers remain engaged in a failing, last-minute effort to throw the election to Trump.

Even as he tweeted this week that he wanted “a big David and Kelly WIN,” Trump called Brian Kemp, the state’s Republican governor, “hapless” for failing to work to overturn the election results, while also criticizing Georgia’s top election official, Secretary of State Brad Raffensperger. His sustained assault on Georgia’s voting system prompted an extraordinary rebuke this week from another high-ranking elections official, who warned of violent threats against poll workers and publicly pleaded with the president to cool down his conspiratorial rhetoric.

On Friday, state Sen. Elena Parent, a Democrat on the judiciary subcommittee, which met Thursday, said that she had been the target of violent, anonymous threats that appeared on a public internet chat room.

The president’s appearance in Valdosta, near the Florida border, on Saturday evening comes after a concerted campaign by his advisers and Republican lawmakers to convince him that his presence is vital to increasing turnout among his supporters. Initially reluctant, the president agreed to hold the rally after being told that victories by the Republican Senate candidates would help prove his contention that his own win in Georgia was stolen from him, according to aides familiar with the conversations.

But some Republicans in Georgia and Washington are fearful that Trump will go off-script and potentially attack Kemp or Raffensperger. Party officials also worry that the president’s claims of fraud could backfire, undermining turnout by convincing Republican voters that the special elections are rigged against them anyway.

L. Lin Wood, a lawyer and Republican supporter of Trump, and Sidney Powell, a lawyer who has filed lawsuits on the president’s behalf, urged Georgians on Wednesday not to vote “unless your vote is secure.”

That same day, a number of prominent Georgia Republicans, including former Gov. Nathan Deal, signed an open letter in which they warned that “the debate surrounding the state’s electoral system has made some within our party consider whether voting in the coming runoff election matters.”

The leaders said that the party needed to focus on winning the two Senate seats or risk turning the Senate over to a Democratic Party that “wishes to fundamentally alter the fabric of our nation into something unrecognizable.”

Some senior Republicans in Washington are doing little to hide their concern about the damage that they believe Wood and Powell are inflicting.

“It’s encouraging the president is going down there to rally the troops, because I know there’s some inconsistent messages being sent to his base supporters,” said Sen. John Cornyn of Texas.

Chip Lake, a Georgia-based Republican strategist who most recently worked for Rep. Doug Collins — who unsuccessfully vied in November for Loeffler’s Senate seat — said Friday that Trump was facing “one of the biggest political speeches the president’s ever had to make, because the stakes are that high.”

“If we have any portion of our base that might decide to boycott this election for any reason whatsoever, then we might be handing over the Senate to Democratic control,” Lake said.

Although a hand-recount of the state’s 5 million votes reaffirmed that Biden had indeed won the Georgia election, Trump’s campaign demanded a second machine recount. Fulton County, which includes much of Atlanta and is the state’s most populous, certified its results Friday. As of Friday evening, state election officials had not responded to queries about when they would officially announce the results of the recount or recertify Biden as the winner.

The urgency of the Senate races was reflected in the huge amounts of money pouring into the four campaigns in recent weeks: about $187 million just in online donations from Oct. 15 to Nov. 23, according to federal records from the donation-processing sites ActBlue and WinRed.

In that 40-day period, both Democratic challengers outraised their Republican opponents every day from online contributions and surpassed the previous Senate fundraising record for a full quarter. Warnock raised $63.3 million in online donations, and Ossoff raised $66.4 million.

In that time, the two Republicans raised $58.2 million.

But well-heeled Republicans have erased much of the Democrats’ financial advantage with giant donations to a super PAC that raised $70 million in less than three weeks from a who’s who of Republican megadonors, including Stephen Schwarzman of Blackstone ($15 million) and Ken Griffin of Citadel ($12 million). Media mogul Rupert Murdoch gave $1 million, as did his son, Lachlan, the chief executive of the Fox Corp.

Loeffler, one of the wealthiest members of the Senate, put $23 million of her own money into her campaign to get to the runoff, and her husband, Jeffrey Sprecher, the chairman of the New York Stock Exchange, has donated an additional $10 million to a pro-Loeffler super PAC.

Big contributions from Democratic donors are lagging the Republicans. The leading Senate Democratic super PAC raised a little more than $10 million in the 20 days after the general election, records show. The biggest donation — $2.5 million — came from the organization that Stacey Abrams created, Fair Fight, after her narrow loss in 2018 for the governor’s race.

As Abrams’ star power has increased, Fair Fight itself has emerged as a major magnet for Democratic giving, pulling in nearly $35 million in 40 days that ended Nov. 23. Abrams, widely credited with leading the Democratic renaissance in Georgia, also appeared in the virtual rally Friday for the two Democratic candidates.

“We won this election decisively, and, despite the number of recounts, it keeps giving us the same answer: that Georgia Democrats showed up, that Georgians showed up and that we decided that we wanted to move this nation in the right direction,” Abrams said.

Ossoff voiced a major theme that both Democratic candidates were seeking to exploit: allegations that Loeffler and Perdue benefited from questionable stock trades as they learned about the seriousness of the coronavirus pandemic. “We’re running against, like, the Bonnie and Clyde of political corruption in America, who represent politicians who put themselves over the people,” he said. Perdue and Loeffler have denied any inappropriate financial dealings.

On Friday, Pence rallied on behalf of Loeffler and Perdue in Savannah, where he warned that Democrats would advance a liberal, big-government agenda if they were allowed to seize control of the Senate.

Pence was joined at the airport by Perdue but not Loeffler, who returned to Atlanta after a young man on her campaign staff was killed Friday afternoon in a traffic accident.

Before the rally, Pence attended the CDC briefing with the Republican candidates, saying the nation is facing a “challenging time” but also “a season of hope,” with the likely approval of the first coronavirus vaccine coming as soon as next week.