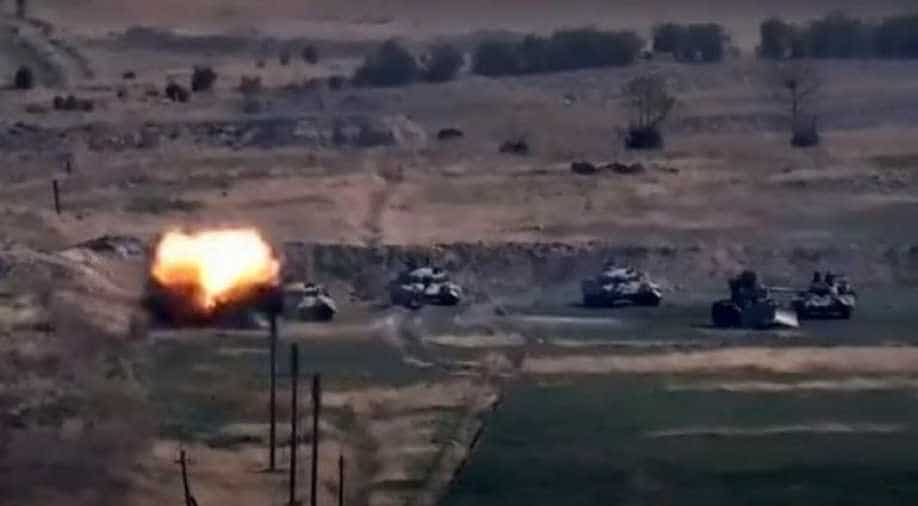 An image grab taken from a video made available on the official web site of the Armenian Defence Ministry on September 27, 2020, allegedly shows destroying of Azeri military vehicles during clashes between Armenian separatists and Azerbaijan in the breakaway region of Nagorno-Karabakh. Photograph:( AFP )

The worst clashes since 2016 have raised the spectre of a fresh war between long-standing rivals Azerbaijan and Armenia which have been locked for decades in a territorial dispute over the Armenia-backed breakaway enclave.

Around 23 people including civilians and military have been killed after Fighting has erupted between Armenia and Azerbaijan around the separatist region of Nagorno-Karabakh.

The worst clashes since 2016 have raised the spectre of a fresh war between long-standing rivals Azerbaijan and Armenia which have been locked for decades in a territorial dispute over the Armenia-backed breakaway enclave.

Armenian Prime Minister Nikol Pashinyan announced in a televised address that Azerbaijan's "authoritarian regime has once again declared war on the Armenian people."

"We are on the brink of a full-scale war in the South Caucasus, which might have unpredictable consequences," he added. "We are ready for this war."

All #Armenians must unite to defend our history, our homeland, identity, our future and our present. And we will win and there is only one prerogative, that we promise ourselves that we won't retreat a single millimeter from defending our people and our #Artsakh.

The office of Azerbaijan's prosecutor general said an Azerbaijani family of five were killed as Armenian separatist forces shelled Azerbaijan's village of Gashalty.

Rebel authorities in Karabakh said 16 of its troops were killed and more than 100 wounded in fighting, as well as two civilians, a child and a woman.

Both sides have accused each other of starting the hostilities.

Talks to resolve one of the worst conflicts to emerge from the 1991 collapse of the Soviet Union have been largely stalled since a 1994 ceasefire agreement.

In July, heavy clashes along the two countries' shared border — hundreds of kilometres from Karabakh — claimed the lives of at least 17 soldiers from both sides.

During the worst recent clashes in April 2016, around 110 people were killed.