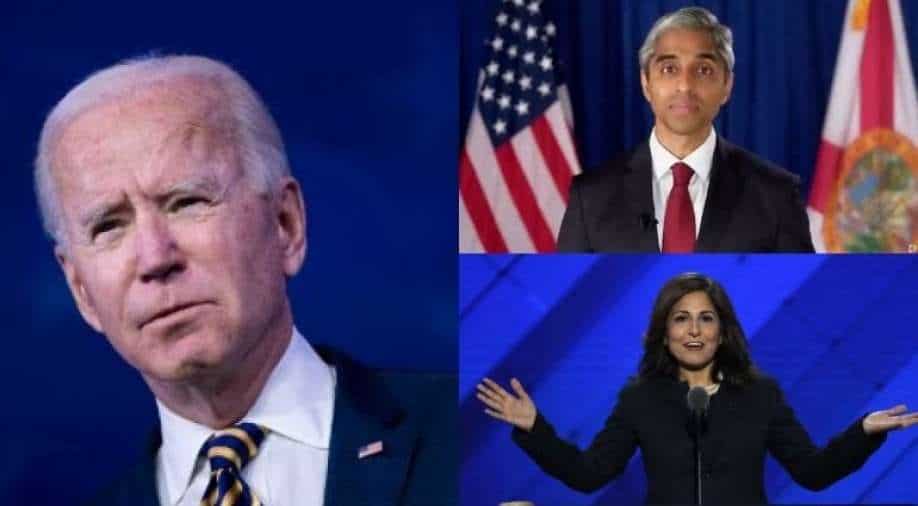 Indian Americans who are chosen by Biden administration to rebuild America (Courtesy: AFP and Reuters) Photograph:( Others )

So, who are these individuals and what has been their history? This report attempts to decode

Long before he was declared President-elect in August, Joe Biden had promised that if he wins, he will rely on the Indian American diaspora for better governance.

Now in less than 100 hours, Biden will be sworn in as the 46th President of the US and he has surely lived up to this promise.

At least 20 Indian Americans have either been named or nominated for key roles in the Biden administration.

So, who are these individuals and what has been their history?

This report attempts to decode.

The 50-year-old has been nominated as the Director for the White House Office of Management & Budget.

Born to immigrant parents from India, Tanden is currently the Chief Executive of the 'left-leaning' Centre for American Progress.

The 45-year-old has been nominated as the Associate Attorney General at the Department of Justice.

If confirmed, she will be the first woman of colour to hold the position.

Murthy has been nominated as the US Surgeon-General at the Public Health Service Commisioned Corps.

He hails from karnataka and has also served as the surgeon-general during the Obama era.

She has been appointed as the Policy Director to the Future First Lady Dr. Jill Biden.

This 32-year-old will also be serving the future first lady as she has been named her Deputy Press Secretary.

For the first time ever two Indian Americans who trace their roots to Kashmir will also be involved at the White House.

She has been named as partnership manager at the White House Office of Digital Strategy.

She will occupy the key position of Deputy Director at the US National Economic Council in the White House.

The National Economic Council will have another Indian American, Ramamurti, who has also been named as the deputy director.

India-born Raghavan, who served in the Obama administration, will return to the White House as Deputy Director at the office of presidential personnel.

In Biden's inner circle will be Reddy who has been named as the Director for Speechwriting.

The Gujarat-born Patel will serve as assistant Press Secretary to the President.

Also, three Indian Americans have made their way to the crucial National Security Council at the White House.

First-generation American Chhabra will serve as the Senior Director for Technology.

Guha will serve as Senior Director for South Asia.

She will serve as Co-ordinator for Democracy & Human Rights.

Aggarwal will be joining the Office of Domestic Climate Policy at the White House.

She will serve as Senior Advisor for Climate Policy & Innovation.

Sharma has been appointed as Policy Advisor for Testing in the White House Covid-19 Response Team.

Lastly, two Indian American women have been appointed in the office of the White House Counsel.

She will serve as the Associate Counsel.

She will serve as Deputy Associate Counsel.

Biden is trying to rebuild the backbone of the US by using American diversity as an essential strength.

And Indian Americans are at the very core of this strategy.