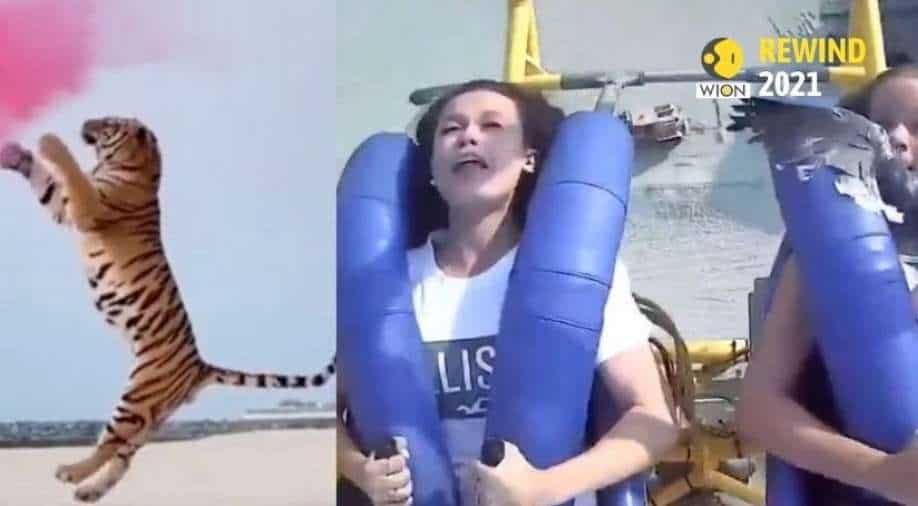 From making a major mistake on social media and listing baby on sale to using a real tiger at a gender reveal party. Here are few incidents from 2021 that surprised the netizens

2021 has been a year with lots of ups and downs. With the entire world trying to battle the deadly coronavirus, there are a few incidents that managed to divert people's attention.

From making a major mistake on social media and listing baby on sale to using a real tiger at a gender reveal party. Here are few incidents from 2021 that surprised the netizens. Scroll below to see video and images.

Back from dead? Woman who 'died' of coronavirus returns home after

In January, people were surprised after an 85-year-old woman, who was thought to be ''dead'' by her family suddenly reappeared. The woman's family was told that she had passed away due to the deadly coronavirus. The hospital further told the family that she had been buried. However, after nine days, she reappeared.

It was then concluded that there was a mix-up over names leading to confusion.

Already scared on the roller coaster ride, teenager collides with a seagull

Roller coaster rides can be extremely scary. The high speed and height can frighten any person. In a terrifying incident in July this year, a teenager who was screaming while sitting on a roller coaster was scared to death after a seagull landed on her chest. Frightening the netizens, the video of the incident went viral.

Kiley Holman was celebrating her friend's 14th birthday on the SpringShot ride at Morey's Piers on the Jersey Shore when she was surprised by an unexpected visitor.

Tiger at a gender reveal party

People in foreign countries follow a ritual of gender reveal parties. In such parties, the gender of an upcoming baby is revealed. People resort to many creative ways to do so. This couple from Dubai got way too creative when they used a real tiger to indicate the gender of their baby.

Posted on Instagram, a video shows a tiger roaming on the beach next to the famed Burj al-Arab hotel in Dubai. Around the tiger, there are a few balloons floating around. Curiously, the tiger makes a big leap, bursting a balloon that sends pink powder into the air, indicating that it is a girl.

After the video went viral on the internet, the couple received a lot of criticism from the netizens.

Man alive after surviving hours in a morgue freezer

In a strange incident in November, a man managed to survive after spending a night in the morgue freezer. The man was declared dead after a road accident. At a private medical facility in Delhi, a doctor declared him dead upon arrival. After this, he was transported to a government hospital for a post-mortem.

After being examined, there were no signs of life found. After the police were informed, his body was placed in the morgue freezer until his family arrived.

It was only when one of his relatives noticed that he was moving, it was concluded that he is alive. A video went viral which show the relative saying, "He's not dead. How did this happen? Look, he's breathing."

Here is the video.

A 45-year-old man, who was declared 'dead' by doctors, was found alive despite spending a night in the freezer of a hospital morgue in #UP’s Moradabad#UttarPradesh #Moradabad pic.twitter.com/iLnTl6VWDi

Mom lists baby up for sale on Facebook by mistake

Social media can sometimes be a tricky thing to understand. Few mistakes made online can never be taken back. In one such mistake, a young mom from Leeds listed her baby for sale accidentally on a local Facebook group. This happened when she was trying to put an image of her sofa for sale but instead, she somehow put an image of her son with a caption that said she needs it "gone today."

She realised that she had uploaded the wrong image after people from all over Leeds commented on that post.

Lucy, who is 20-years-old, had posted pictures of her brown sofa but she did not realise that she had also included a smiling image of his seven-months old baby boy Oscar.

The incident left netizens in splits as the post gathered hilarious comments from the netizens.

People were shocked after a noodle seller in Vietnam was called summoned by the police for a parody video of the very famous Salt Bae. Bui Tuan Lam shared a video where he can be seen imitating the chef. While it became a reason for laughter for many on the internet, Bui Tuan Lam had to face some serious consequences.

However, it turned out that the incident had to do with much more than Salt Bae. Vietnam's Minister of Public had recently visited Salt Bae's restaurant in London.

Post his visit, images of him having gold leaf encrusted steak went viral on social media. This steak costs USD 1960. When Bui Tuan Lam made this video it was seen as a way of mocking the minister. Here is the video which was shared.

People were taken by surprise after there were reports of a 70-year-old hunter in France getting bitten by a bear. Animal's bite can be injurious and for a 70-year-old to be able to survive such an attack astonished many people.

However, as per reports, arteries in the man's leg were severely damaged in the incident and he had to be transported to the intensive care unit of a hospital in Toulouse.

In retaliation, the man managed to shoot the bear in the Seix region of Ariege, reported the officials.

An investigation to analyse the circumstances of the accident is still ongoing.