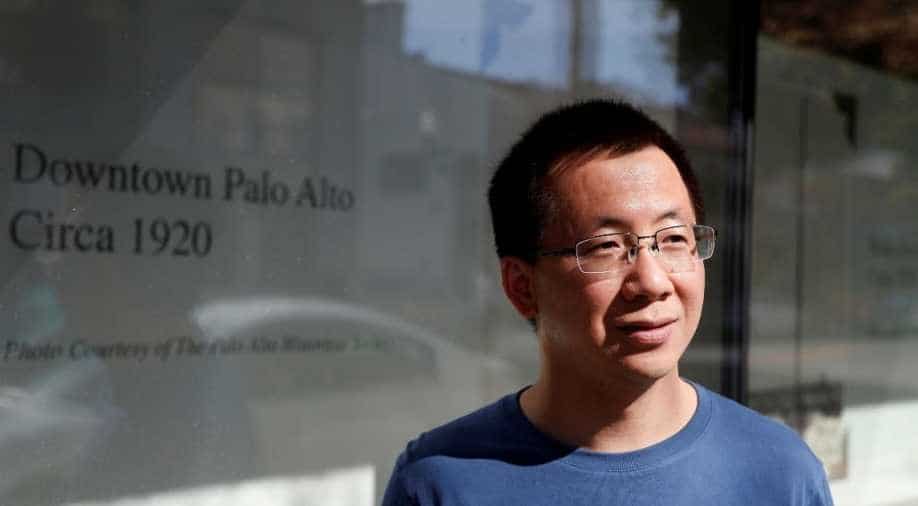 Zhang told staff on Monday in another internal letter that the company had started talks with a tech company so it could continue to offer the TikTok app in the United States.

ByteDance founder and CEO Zhang Yiming is going through the worst phase of his life as his is creations are being banned abroad and is being called a traitor.

With an exit from the American market looking inevitable, told employees on Tuesday there were misunderstandings on Chinese social media about TikTok's situation in the United States and that the company could face more difficulties as anti-Chinese sentiment rose abroad.

Yiming's comments in a letter to ByteDance's Chinese employees came after the company and Zhang were heavily criticised on Chinese social media for entering into talks with Microsoft Corp to sell TikTok's US operations.

"I actually understand (the criticism)," Zhang said in the letter. "People have high expectations of a company founded by a Chinese person which is going global but have little information about it. With lots of grievances towards the U.S. government, they tend to lash out at us with harsh criticism."

Since Monday, some users of China's Twitter-like Weibo have said they would uninstall ByteDance's Chinese short video app Douyin and news aggregator Jinri Toutiao because they believed ByteDance had given in too quickly to Washington.

Others urged ByteDance to learn from US giant Google, which opted to pull its search engine out of the Chinese market in 2010 after China asked it to censor its search results, rather than selling off its Chinese operations.

Zhang said some people had misunderstood the US situation. He said Washington's goal was not to force a sale of TikTok's US operations through the Committee of Foreign Investment in the US (CFIUS) but to ban the app, and there was a legal process ByteDance had no choice but to follow.

Zhang told staff on Monday in another internal letter that the company had started talks with a tech company so it could continue to offer the TikTok app in the United States.

US President Donald Trump initially dismissed the idea of selling TikTok's US operations to Microsoft but changed his mind following pressure from some advisers and many in the Republican party, because banning TikTok could alienate many young voters.

Zhang also told employees that over the last two years, anti-Chinese sentiment had risen in many countries and the company must brace for more difficulties in the current atmosphere.

The probe was over an acquisition of an American social media app musical-ly which Bytedance had acquired three years ago.

Musical - ly was later merged with TikTok. But, Bytedance didn’t clear the deal with the committee. And, it believes that bytedance must now disinvest the entire american operations.

Trump has set the deadline for Bytedance's departure, that is, September 15 otherwise, TikTok will be banned in America.

After India banned Tiktok, the company is on the verge of getting banned in Australia and Japan.

Hundreds of anonymous users joined in under a post about Zhang’s letter, cursing him as a traitor of China, an American apologist and a coward, among many other labels.

Netizens are angry with the impending sale of TikTok and are cursing him. Armies of angry people began bombarding Zhang on Weibo. Reportedly, their accounts was suspended.

ByteDance CEO has hidden all his Weibo posts from the public, after patriotic netizens called him out for betraying Chinese interest for considering the TikTok US sale.

Earlier today, a tweet claimed that all Weibo posts from zhang are now hidden from his profile.

Some of Zhang’s Weibo posts from the early 2010s, which can be seen by some as liberal-leaning, putting the entrepreneur in the rank of “public intellectuals.” The term has in recent years been thought of as derogatory, as internet patriots see the group as ignorant and worshippers of western values.

Now, in the rest of the world that tag is considered as a compliment. But in China, it’s an insult because, Chinese patriots see public intellectuals as ignorant, and worshippers of western values.

Bytedance has not betrayed the homeland. Tiktok is being banned because it cannot compromise on one thing: complete loyalty to the Chinese state and the Communist Party.

In 2018, a meeting was organised by the internal party committee of Bytedance to “implement the spirit of national propaganda”.

Chinese law requires every company to set up party committees within their organizations. They must have three or more members of the communist party. That’s how the Chinese state makes its presence felt in every boardroom of China.

In the past, tiktok has been caught blocking criticism against the Chinese state by censoring videos, posts against the Tiananmen square.

Tiktok has been accused of advancing China’s foreign policy aims. Now, it is being forced to either sell its business, or go offline.