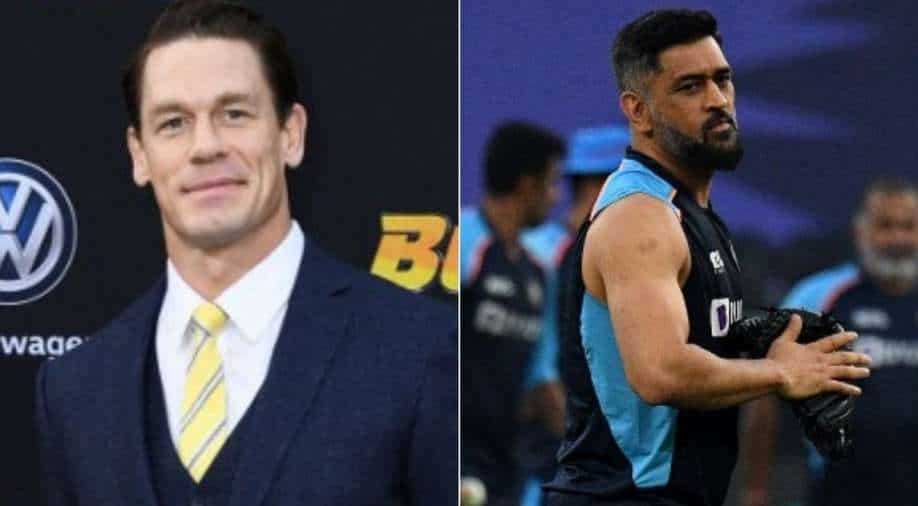 One of the users wrote that there's nothing, "just two legends [Dhoni and Cena] shaking hands" and since Cena is not in the image, users have hilariously commented that "You can't see him" — the popular catchphrase

WWE superstar John Cena has shared an image of the former captain of the Indian cricket team Mahendra Singh Dhoni on his verified Instagram account. The famous actor and television presenter often shares photos of celebrities, sometimes Indian personalities too. Now, it's Dhoni's image that has generated a buzz. However, the post has left millions of fans wondering what does it actually mean as the WWE star has not written anything as the caption. He has previously posted images of cricketer Virat Kohli, Bollywood star Shah Rukh Khan in a similar manner. Only photo, no caption, just random!

One of the users wrote that there's nothing, "just two legends [Dhoni and Cena] shaking hands" as Dhoni's right hand is out as if he is shaking his hand with someone. Some social media users commented yes both the legends are shaking hands, but "You can't see him".

'You Can't See Me' catchphrase was made popular by none other than the star wrestler. During fights, he waves his hand in front of his face, saying, "You can't see me". This is one of his signature taunts.

Here are some other posts by John Cena:

The image appears to be from the ICC Men's T20 World Cup 2021, where MS Dhoni served the role of Team India's mentor. The 40-year-old, who retired from international cricket last year, is India's most successful captain having won the World Cup, the inaugural T20 World Cup and the Champions Trophy.

The accomplished player Dhoni was included as the team's mentor to boost the camp's morale. However, strategies didn't go as planned as India couldn't make it to the semi-final final of the T20 World Cup 2021.