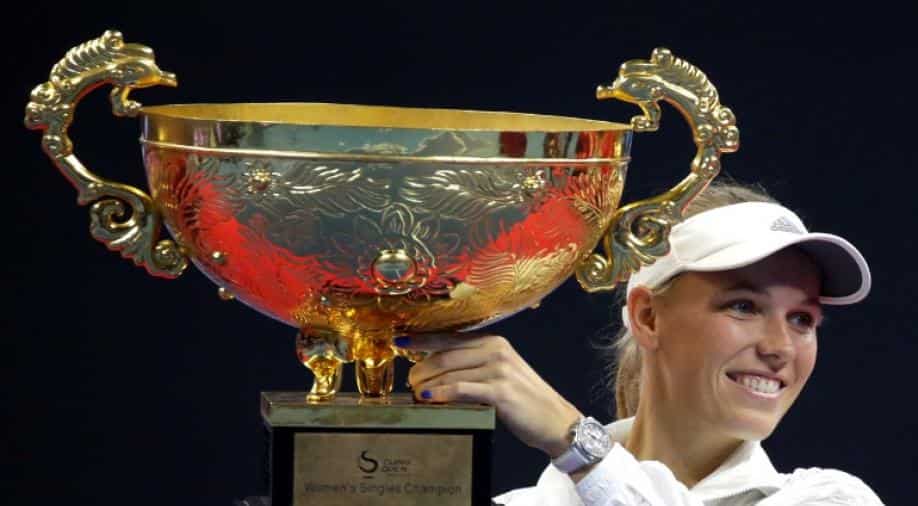 Caroline Wozniacki of Denmark celebrates with the trophy after winning the match against Anastasija Sevastova of Latvia. Photograph:( Reuters )

Wozniacki's victory is bound to boost her confidence ahead of this month's season-ending WTA Finals in Singapore, where the 28-year-old is the defending champion.

The Dane, who did not drop a set throughout the tournament, hit 12 winners and won four out of eight break point chances to beat the unseeded Sevastova in 87 minutes.

It was Wozniacki's second title in Beijing, following her success in 2010 which had taken her to the top of the world rankings for the first time in her career.

"I feel great being here. Having won again... eight is my lucky number and it is eight years ago I won here so I felt like it was my year," world number two Wozniacki said.

After easing through the first set, Wozniacki raced to a 4-1 lead in the second. Sevastova, who has been managing a stomach muscle injury since the round of 16, broke back to give herself a chance to mount a comeback.

But Wozniacki saved three break points to take a 5-3 lead as Sevastova struggled for consistency. The world number 20 made 35 unforced errors in the match, including 21 in the second set, to allow Wozniacki to close out the victory.

Sevastova, who has not beaten Wozniacki in five attempts, said was pleased with her performance this week despite missing out on a second title of the season.

"It was one of my best tournaments ever. Caroline played amazing today, it's always tough playing against her and I have never won. I hope that we will continue to have good matches," Sevastova said.

Wozniacki's victory is bound to boost her confidence ahead of this month's season-ending WTA Finals in Singapore, where the 28-year-old is the defending champion.