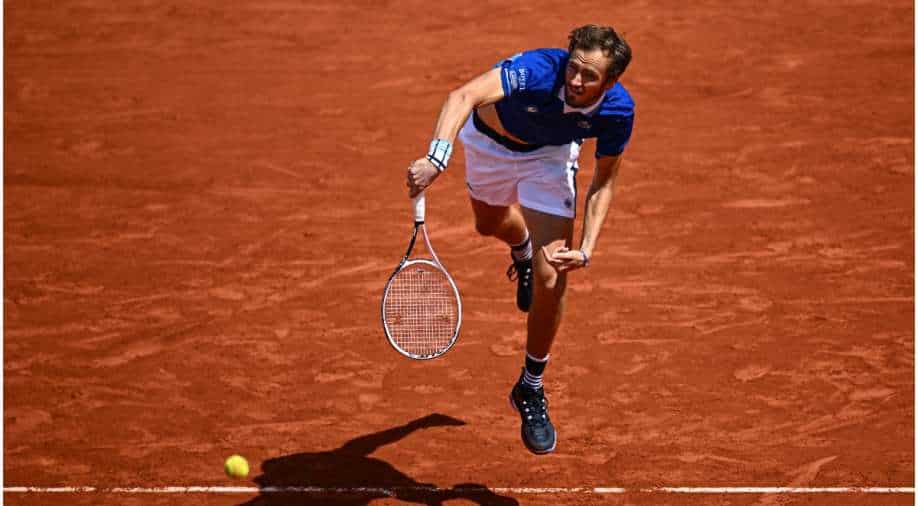 The 2021 U.S. Open champion, who briefly held the world number one ranking earlier in the season, played his first clay event of 2022 last week in Geneva after a two-month break but lost in the opening round to Frenchman Richard Gasquet.

World number two Daniil Medvedev showed no signs of discomfort from his recent hernia operation, kicking off his French Open campaign with a comfortable 6-2 6-2 6-2 win over Argentine Facundo Bagnis on Tuesday. The 2021 U.S. Open champion, who briefly held the world number one ranking earlier in the season, played his first clay event of 2022 last week in Geneva after a two-month break but lost in the opening round to Frenchman Richard Gasquet.

Clay courts have not been Medvedev`s strong suit and he was 0-4 at Roland Garros before last year`s tournament but turned around his dismal record by reaching the quarter-final of the 2021 edition of the Grand Slam. "I love Roland Garros, especially since last year," Medvedev said with a smile during his on-court interview. "Before that I don`t know if I actually loved it given that I was out on Sunday when the tournament was actually starting on Monday.

"But now it`s Tuesday and I`m still here. I`ve been well after my surgery, I didn`t think I would be able to play on clay. But with the help of the doctors and the physios I`ve been able to be back on my feet to even play a match on clay last week and I`m 100% ready to play Roland Garros."

After trading service breaks at the start of Tuesday`s contest on a chilly and windy morning on Court Suzanne Lenglen, Medvedev took control of his first matchup against the left-handed Argentine, ranked 103rd in the world currently. The 32-year-old Bagnis, who retired with injury during his first round in Geneva, had his right leg heavily taped and suffered a fall while serving during the second set.

But he continued playing despite limping between points amid applause from the crowd. The pair traded breaks of serve once again early in the third set but Medvedev, who hit 35 winners while keeping his unforced errors in check, kept his composure and broke his opponent twice more to seal the contest.
Medvedev will next meet the winner of the match between Lithuanian Ricardas Berankis and Laslo Djere of Serbia for a place in the third round.