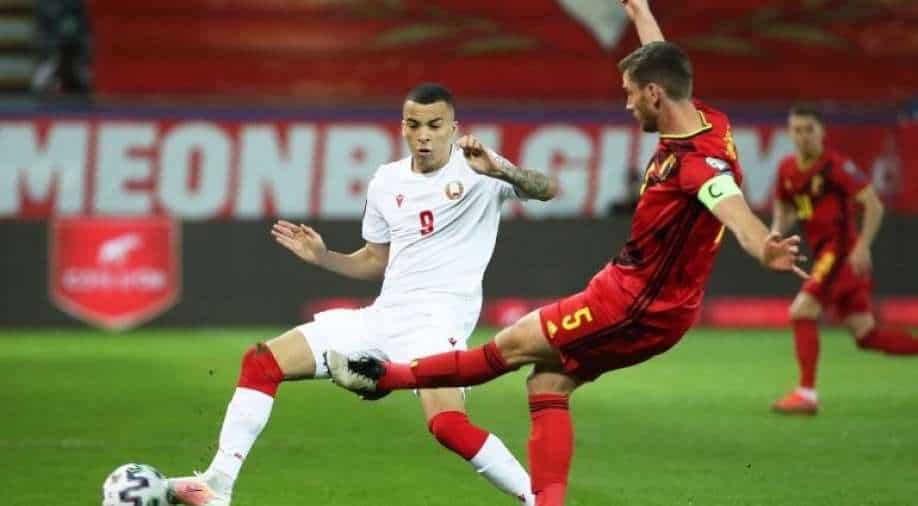 Belgium top the group with seven points from three games, three points ahead of the Czech Republic who fell to a 1-0 defeat in Wales after Daniel James headed a late winner from a cross by Gareth Bale

Top-ranked Belgium slammed eight goals against Belarus and the Netherlands crashed seven past Gibraltar but Portugal suffered a scare before beating Luxembourg as the World Cup qualifying matches continued on Tuesday.

There were also victories for Croatia, Serbia and Norway while Slovakia shocked Russia and Wales got their campaign up and running with a late winner against the Czech Republic.

Belgium had been held 1-1 by the Czechs at the weekend but claimed their second Group E win in emphatic fashion.

Coach Roberto Martinez gave chances to several of his fringe players and was rewarded with a rampant display as Hans Vanaken and Leandro Trossard scored twice while Michy Batshuayi, Jeremy Doku, Denis Praet and Christian Benteke were also on target.

Belgium top the group with seven points from three games, three points ahead of the Czech Republic who fell to a 1-0 defeat in Wales after Daniel James headed a late winner from a cross by Gareth Bale. The Welsh have three points.

Both sides ended with 10 men after Patrik Schick saw red for the Czechs just after halftime, while Connor Roberts was sent off for the hosts shortly before the winning goal.

The Netherlands could not quite match their neighbours Belgium but four goals in nine second-half minutes helped them demolish Gibraltar in Group G.

Only Steven Berghuis's goal separated the sides at halftime but Luuk de Jong, Memphis Depay, Georginio Wijnaldum and Donyell Malen all scored in quick succession before Donny van de Beek added a sixth and Depay got his second to give the Dutch their biggest away win since a 7-0 success over San Marino in 1993.

The Netherlands have six points, one behind Turkey who were surprisingly held to a 3-3 draw at home by Latvia.

Turkey had beaten the Dutch and Norway in superb fashion to lead the group but came unstuck as Davis Ikaunieks scored late on for Latvia to deny the hosts a third consecutive win.

Luxembourg, who stunned Ireland 1-0 at the weekend in Group A, looked to be on course for another sensational result when they took the lead against Portugal thanks to a goal by Portuguese-born Gerson Rodrigues on the half hour mark.

But Diogo Jota headed an equaliser in the second minute of added time at the end of the first half and Cristiano Ronaldo put his side ahead early in the second half.

Substitute Joao Palhinha sealed the win in the 80th minute as Portugal moved top of the section.

They are level on seven points from three games with Serbia for whom Aleksandar Mitrovic scored both goals in a 2-1 win away to Azerbaijan. He has already scored five goals in the campaign.

Croatia laboured to a 3-0 win at home to Malta with second-half substitutes Ivan Perisic, Luka Modric and Josip Brekalo scoring to put the 2018 World Cup runners-up top of Group H.

Croatia have six points from three games, ahead of Russia on goal difference after they lost 2-1 to Slovakia for whom Robert Mak struck the winner in the 74th minute.

In Group G, Norway earned a 1-0 win away to Montenegro with Alexander Sorloth scoring the first-half winner to move them to six points, level with Montenegro and the Netherlands.

World champions France, England, Spain, Germany and Italy are all in action in Wednesday's qualifiers.