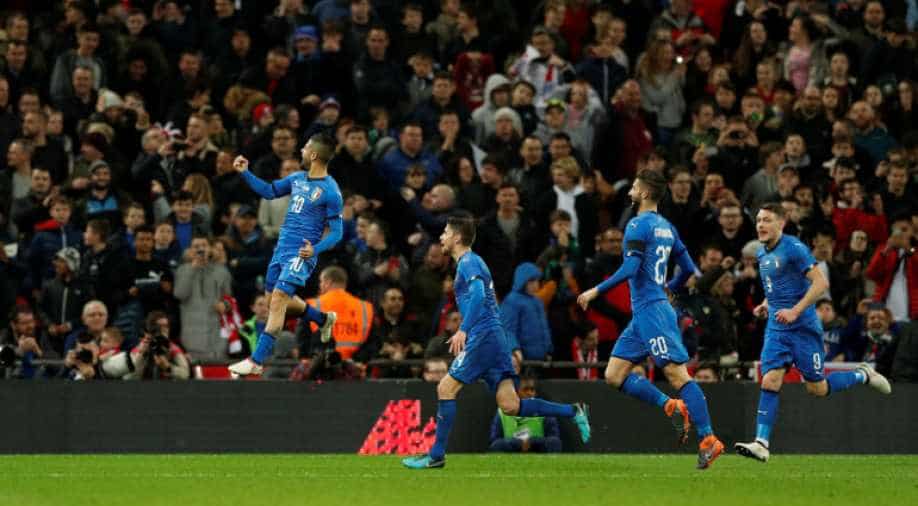 World Cup-bound England had the wind taken out of their sails as Italy's Lorenzo Insigne scored an 86th-minute penalty, awarded by VAR, to cancel out Jamie Vardy's opener and secure a 1-1 draw in a friendly at Wembley on Tuesday.

The Video Assistant Referee will be used at this year's finals in Russia and as an example of things to come it rescued Italy as they gained some crumbs of comfort after a woeful run of form that cost them a place at the tournament.

It was tough on England who, apart from a sloppy opening spell, had looked reasonably assured in what was a high-profile audition for those players still hoping to grab a place in Gareth Southgate's final squad.

Vardy did his chances no harm at all when he thumped home after a quickly-taken free kick by Jesse Lingard in the 26th minute for his seventh England goal.

Burnley's James Tarkowski, handed a debut in a back three, also did little wrong although it was his tackle on substitute Federico Chiesa that allowed Italy a first goal in four games and ended England's run of five clean sheets.

Two of those shutouts were against Germany and Brazil while they also beat the Netherlands 1-0 in Amsterdam on Friday and, although they could not take the scalp of four-times world champions Italy, the England boss was upbeat.

"I feel that we have made positive progression," Southgate, who will name his provisional 33-man squad on May 14, said.

"In terms of the last four games we have played four of the biggest football countries in the world and we have been competitive in every game and our patterns of play have become a lot clearer to everybody."

What is not yet clear is the impact of VAR.

Chiesa's theatrical fall did not initially impress German referee Deniz Aytekin but after the intervention of VAR he pointed to the spot and, with boos ringing around the stadium, Insigne beat Jack Butland with a perfect spot kick.

It was a marginal call as Chiesa appeared to be already off balance when Tarkowski inadvertently trod on his foot.

Italy arrived at Wembley in the doldrums after becoming the biggest casualties of the qualifying campaign.

England, on the other hand, are attracting quiet optimism after steady progress under Southgate's thoughtful stewardship.

There are still questions to answer, however, and John Stones did his best to undermine the growing confidence in England's defence with a sloppy opening in which he twice almost allowed Ciro Immobile to score.

First he played Immobile onside but the striker failed to react quickly enough and then Stones dallied on the ball in his own area and had his pocket picked by Immobile who again lacked the required sharpness to punish the Manchester City man.

Immobile wasted another chance when he headed over the bar after being left unmarked in the area.

Raheem Sterling was England's best attacking option with his driving runs causing panic at the heart of Italy's defence.

He had already carved out a chance for Vardy when he burst forward again only to be bundled over on the edge of the area.

Jesse Lingard took the free kick instantaneously and rolled the ball to Vardy who smashed his shot past Italy's teenage keeper Gianluigi Donnarumma.

The goal settled England down and they began to assert some control with Ashley Young, given a first start under Southgate, rolling a cross-shot just wide after another Sterling burst.

England were comfortable after the break as Italy lacked any goal threat but the usual raft of substitutions from both sides disrupted what little rhythm the match had.

The Mexican waves were well underway when Italy finished with a late flourish.

Insigne went close with a volley after some slick passing and then Chiesa fell theatrically under the challenge of Burnley defender Tarkowski to change the mood in the stadium and send the small Italian contingent in the 82,000 crowd home happy.