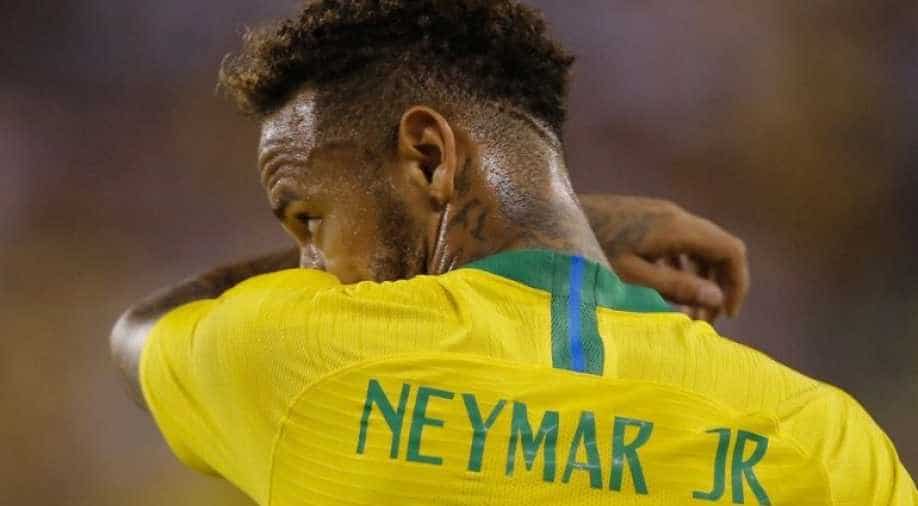 Since the scandal exploded over the weekend the story has dominated the news in Brazil, as fans fear that Neymar's troubles will affect their team's performance in the upcoming Copa America

Brazilians for the first time late Wednesday heard from the woman who says that football superstar Neymar sexually assaulted her at a Paris hotel.

Extracts of a televised interview with Najila Trindade Mendes de Souza, the alleged victim, aired just one hour before Neymar was about to enter the pitch for a friendly game between Brazil's national team and Qatar in the capital Brasilia.

"It was aggression together with rape," said the woman in an interview broadcast on the SBT network. The full interview is scheduled to air on Monday.

Trindade, who says she works as a model, acknowledged that she initially liked Neymar - full name Neymar da Silva Santos Junior - and wanted to have sex with him.

The football megastar paid for a plane ticket to bring her from Brazil and put her up in a Paris hotel.

Things changed dramatically at their first encounter, Trindade said. "He was aggressive, totally different than the boy that I got to know on the messages.''

"Since I really wanted to be with him I said, OK, I'm going to try to handle this," she said.

After some kissing and caressing, she said, "he started to hit me ... then he began to hurt me a lot, and I asked him to stop because it hurt."

According to Trindade, Neymar apologized, but then continued hurting her while they had sex.

Separately, the G1 news website reported that police have a video that Trindade recorded of an alleged second encounter between the two.

The contents were not made public.

Neymar, who was transferred to Paris Saint-Germain from Barcelona for a world-record 222 million euros ($248.5 million) in 2017, wrote on Instagram that the evening's game would be the most difficult of his career "due to the circumstances."

In the end, he only lasted 20 minutes in the game and limped off the field aided by two members of the team's support staff with an ice pack wrapped around his ankle.

Brazil's talk of the town

Since the scandal exploded over the weekend the story has dominated the news in Brazil, as fans fear that Neymar's troubles will affect their team's performance in the upcoming Copa America -- South America's continental championship, which Brazil is hosting and last won in 2007.

Brazil's national coach Tite said he had no plans to drop the striker.

"Neymar is a different kind of player that I'll want in the team until the last moment because of his talent," Tite said.

When asked how the striker was feeling, Tite -- visibly moved -- said: "I just want the situation to resolve itself, I'm not taking sides. I want it to be resolved by hard work"

Neymar, who insists on his innocence, published a video stating that he was the victim of entrapment.

In the same video he also posted intimate WhatsApp messages he said he had received from his accuser and photographs of her topless in a bed.

One of the most colourful phrases of the exchange was "Good morning, an object of my libido" - which has quickly become an online catchphrase across Brazil.

Brazil's football chief said Wednesday that Neymar would play in the Copa America, which kicks off on June 14, despite the rape allegations, although the late Wednesday injury may change those plans.

The scandal caps a troubled season for the player, on and off the field. It has been marred by a recurring injury, two separate suspensions for insulting a referee and hitting a fan, and the loss of Brazil's captaincy in the Copa.

Neymar's father has claimed his son was the victim of a blackmail attempt, which the accuser's former lawyers have rejected.

Adding to Neymar's woes is a police investigation into the publication of intimate information in his Instagram video without the woman's permission. Such an offence carries a maximum five-year jail term.

Neymar's mother Nadine Goncalves posted an emotional message on Instagram on Tuesday urging her son to "forgive that girl" and "return to Jesus".