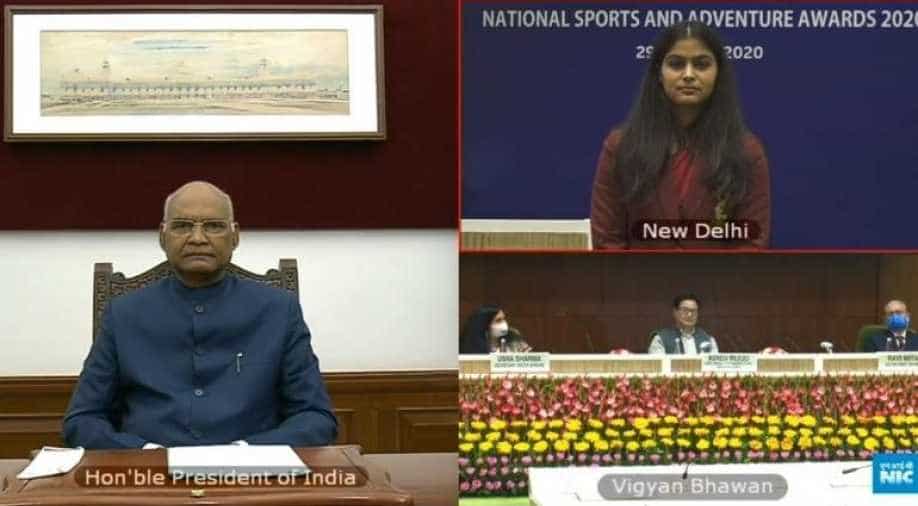 60 award winners attended the National Sports and Adventure Awards 2020 via a virtual event on Saturday.

"Due to health and other reasons issues, 14 awardees will be not be attending the National Sports Awards functions from various SAI centres," SAi said in a statement.

In the virtual format, President of India attended through NIC link from the President's house, via video conferencing, while the recipients were present at SAI and NIC centres in various locations across the country.

Today is #NationalSportsDay and I pay my tribute to the 'The Wizard of Indian Hockey' Major Dhyan Chand on his Birth Anniversary. The great sportsman displayed unparalleled dedication and skills in Hockey to bring accolades and honour to India 🇮🇳 #MajorDhyanChand pic.twitter.com/ByCzcUgS4Y

On National Sports Day, I offer my tributes to the Wizard of Hockey Major Dhyan Chand. On this day I also salute the outstanding talent and great achievements of India’s sportspersons.Govt led by PM Shri @narendramodi is leaving no stone unturned to promote sports in our country.

There are 74 awards in seven categories. All health and safety protocols, in keeping with the guidelines of the Health Ministry, are being followed at all the venues where dignitaries and awardees will be present.

Further, the Sports Ministry has advised every award winner to undergo a COVID-19 test before reporting to the venue.

Sports Awards are given every year to recognize and reward excellence in sports.

Rajiv Gandhi Khel Ratna Award is given for the spectacular and outstanding performance in the field of sports by a sportsperson over a period of four years preceding the award; Arjuna Award is given for consistent outstanding performance for four years; Dronacharya Award goes to the coaches for producing medal winners at prestigious international sports events; Dhyan Chand Award is for lifetime contribution to sports development and Rashtriya Khel Protsahan Puraskar is given to the corporate entities (both in private and public sector) and individuals who have played a visible role in the area of sports promotion and development.

Overall top performing university in inter-university tournaments is given Maulana Abul Kalam Azad (MAKA) Trophy. In addition to these Sports Awards, the spirit of adventure among the people of the country is recognized by bestowing the Tenzing Norgay National Adventure Award.