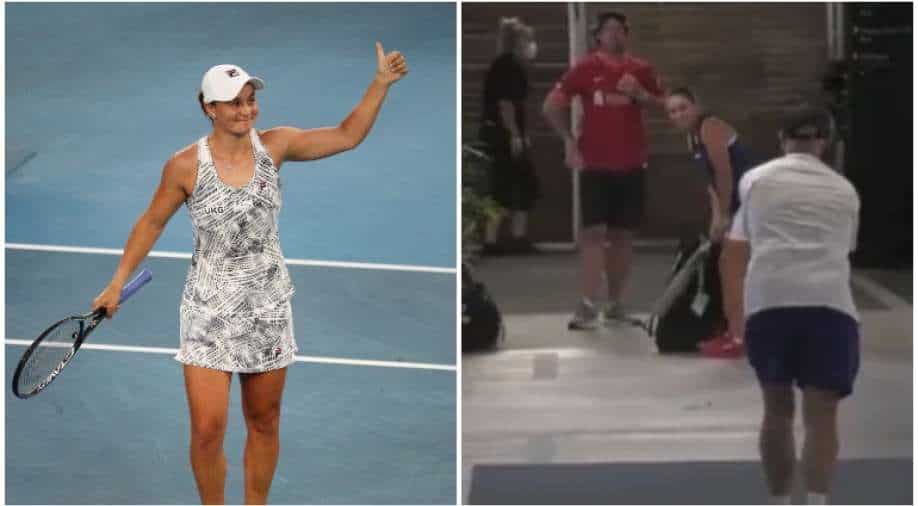 Ahead of her semi-final clash versus Madison Keys, Ashleigh Barty showcased her cricketing skills on the sidelines of the showpiece event Down Under. Here's the video:

Ashleigh Barty is set to compete with America's Madison Keys in the semi-finals of the Australian Open 2022 in the women's singles category. Ahead of the mouth-watering clash, the Aussie star showcased her cricketing skills on the sidelines of the showpiece event Down Under.

For the unversed, the World No. 1 Barty is a former professional cricketer as well. The Aussie had taken a break from her tennis career in 2014. In 2015, she took part in the Women's Big Bash League and turned up for the Brisbane Heat, a popular franchise having teams in both men's and women's BBL.

Barty didn't have a lengthy cricketing career, where she only played a total of 10 matches with a high score of 39 for the Heat. She returned back to tennis and the No. 1 player continues to win hearts on the court. Recently, she recently flaunted her cricketing skills during the ongoing Aus Open:

Reflecting back on her brief cricketing career, Barty had said in an interview in 2019, "It truly was an amazing period of my life. I met an amazing group of people who couldn't care less whether I could hit a tennis ball or not. They accepted me, and they got to know Ash Barty. They got to know me. I still have those relationships to this very day. I got an amazing amount of messages over the last couple of days from those cricket girls who were some of my best friends."

ALSO READ | Sania Mirza to hang up her boots: Here's how much money Indian star has earned in her illustrious career

Barty, on Tuesday, defeated Jessica Pegula 6-2, 6-0 to advance to her fourth Grand Slam semi-final. She is on the cusp of creating history by becoming the first Aussie woman to clinch the Australian Open title in Melbourne since Chris O'Neil (1978). She will face Madison on Thursday for a spot in the final.