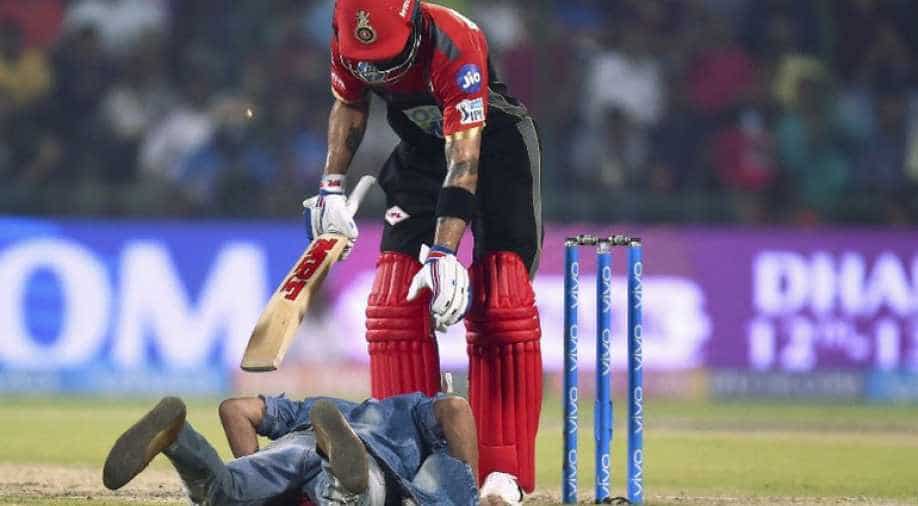 After MS Dhoni, it was the turn of current India skipper Virat Kohli to get the same sort of reverence from a fan, who breached the security at the Feroz Shah Kotla during the IPL 2018 match between Delhi and Bangalore.

Kohli smashed a brilliant 40-ball 70 to defeat Delhi but that didn't deter the Kotla crowd from getting behind their hometown hero.

There was massive support for Kohli, despite him playing for the opposition side.

And while Kohli was going great guns, a fan ran on to the field and fell at Kohli's feet before being whisked away by the security.

The enthusiastic fan even managed to sneak in a selfie with the Indian batting star.

Didn't I tell you? He doesn't has Fans, He has Devotees. ?❤ And also when the security took him away Vee was like Be careful Be careful! How sweet! ❤ And still ppl call him egoistic and Selfish! Those ppl can rather die instead of speaking Shit about such a genuine personality. ?❤ . . . @virat.kohli #vee #virat #kohli #viratkohli #kohlivirat #anushkasharma #anushka #nushkie #couplegoals #cutest #babe #virushka #virushkaforever #virushkalove #virushkawedding #viratians #proudviratian #extremelyvirat #viratians #love #loveu #runmachine #cheeku Video credits:- @sureshraina.addicts

Bangalore, needing a win to stay in contention for the playoffs, were given two early jolts in the chase with Moeen Ali (1) and Parthiv Patel (6) falling in the 2nd and 3rd over respectively. Kohli and AB de Villiers rose to the occasion when their team needed them the most while chasing a target of 182 runs.

The two took matters into their hands and shared a scintillating 118-run stand off just 64 balls to put the team in the driver's seat in the chase.

Bangalore reached the target without much fuss with five wickets in hand and an over to spare.

The much-needed win tonight was Bangalore's fourth in 11 games, keeping them in contention for a playoff spot.

The loss for the hosts meant their campaign got worse as they registered their ninth defeat in 12 matches.