Watch: Usain Bolt scores header, but far away from getting footballer's tag 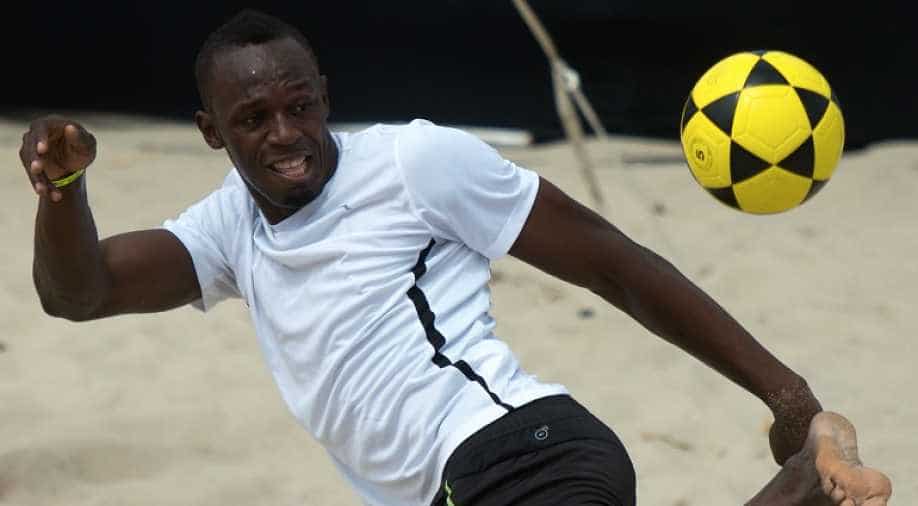 During the training session, Bolt sent a warning to the footballing fraternity by netting with a beautiful header. Photograph:( Zee News Network )

Usain Bolt, one of the most successful athletes of all time having won eight Olympic gold medals, is ready to start a new career and live his dream of playing football at an age when most footballers hang up their boots.

31-year old Bolt was recently invited by German giants Borussia Dortmund of Bundesliga league to train with the 'Black & Yellow.' Almost 200 journalists and 1500 fans had gathered to cheer for the sprinting legend.

Borussia Dortmund live-streamed the training session and in China alone 1.2 million viewers tuned in. The Chinese seemed excited because in recent years football has grown massive in the country.

Recently, Chinese teams have bought some good players, not to forget the recent transfer of Javier Mascherano from FC Barcelona to Hebei China Fortune, to increase their presence in the game.

During the training session, Bolt sent a warning to the footballing fraternity by netting with a beautiful header.

“Overall, I’d give myself a seven out of 10,” he said. “It was fun, the guys were cool and they were welcoming, but I can tell I was unfit."

“I like to play on the wing, right now I am unfit so I try to stay up top [as a striker]. I’ve heard a lot about the fans here – that really was an experience.”

Bolt said he is serious about realising his 'dream' of becoming a top-class footballer after training with Borussia Dortmund. But the question here is, whether he is ready or not?

He will undoubtedly have speed, more than anyone who has ever played, but the dribbling skills are certainly not there. Speed is nice, skills and accuracy are necessary. Football skill has no value to sprint speed, but sprint speed has a big value to football skill.

As expected, Bolt, the 100m and 200m world record holder, showed phenomenal pace over the turf during the training sessions but to play in the world's competitive leagues against legends like Messi, Ronaldo etc, speed is not enough.

Speed also is often a curse in football as the twists and turns on the pitch often lead to lengthy injury spells for fleet-footed players.

His weight is also an issue, Usain Bolt is too heavy for football. The only place he can play for 90 minutes is as the goalkeeper. Nobody plays football or soccer at 90 kg and above. Even the big central defender is only 80 kg.

In the recent training session, he refused to measure himself against Dortmund’s professionals that he advocated by saying, “I don’t compare myself to them yet. I want to play at the level I know I can, to improve and to learn from them.”

“Until then, I am just going to working hard and pushing myself,” he further added.

Fans and spectators will find the answers soon as is already due to play at Old Trafford stadium in a charity football match on June 10.