Watch: Man City and Chelsea fans clash on streets of Porto ahead of UCL finals 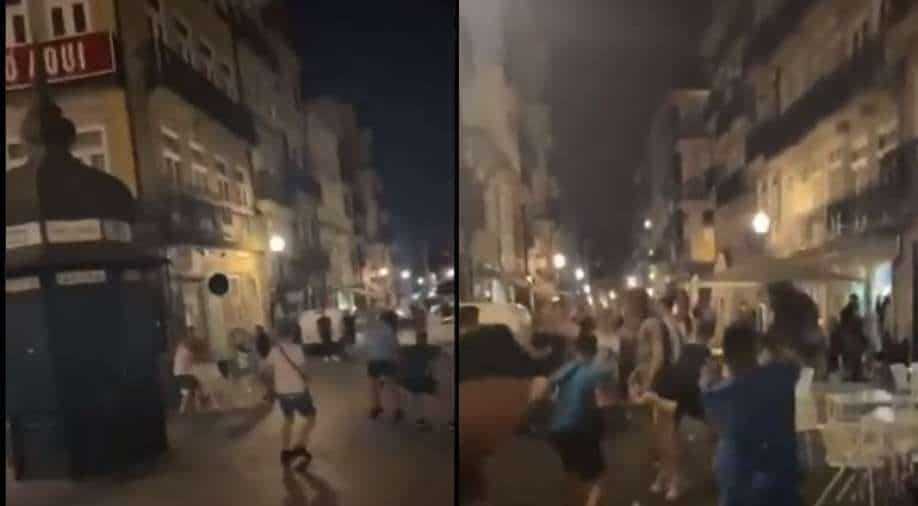 According to reports, Chelsea and City fans clashed with Porto police and each other in altercations that could lead to heightened security being deployed on the streets.

Manchester City will take on Chelsea in the highly anticipated finale of the UEFA Champions League. However, fans of both clubs have clashed on the streets of Porto ahead of the match. Video footage emerged on Thursday and is being circulated around social media where fans from both sides can be seen fight against each other.

According to reports, Chelsea and City fans clashed with Porto police and each other in altercations that could lead to heightened security being deployed on the streets.

For some reason it always ends up with chairs being lobbed about 🤔pic.twitter.com/irFI4sY1Xp

UEFA on Tuesday announced that up to 16,500 spectators will be allowed to attend the UEFA Champions League final between Manchester City and Chelsea on Sunday in Porto. The ticket sales for the match opened on Tuesday.

The figure allowed by the Portuguese authorities stands at one-third of the capacity of the Estadio do Dragao, which took over the hosting after Istanbul was ruled out due to COVID-19 issues.

UEFA has already allocated as many as 6,000 tickets to each Chelsea and Man City.

To this will be added the traditional invitations, as well as "1,700 tickets reserved for the general public" which "will be sold on a first-come, first-served basis".

Tickets for the UCL final cost from 70 euros to 600 euros -- against a range of 40 to 130 euros for Wednesday's Europa League final in Gdansk between Manchester United and Villareal.

Spectators will “require proof of a negative Covid-19 test" to enter the stadium. Fans coming from abroad "will have to comply with border entry restrictions and requirements that will be in force".

With Portugal being on the green list of the British government, players or fans won’t have to quarantine upon returning home.