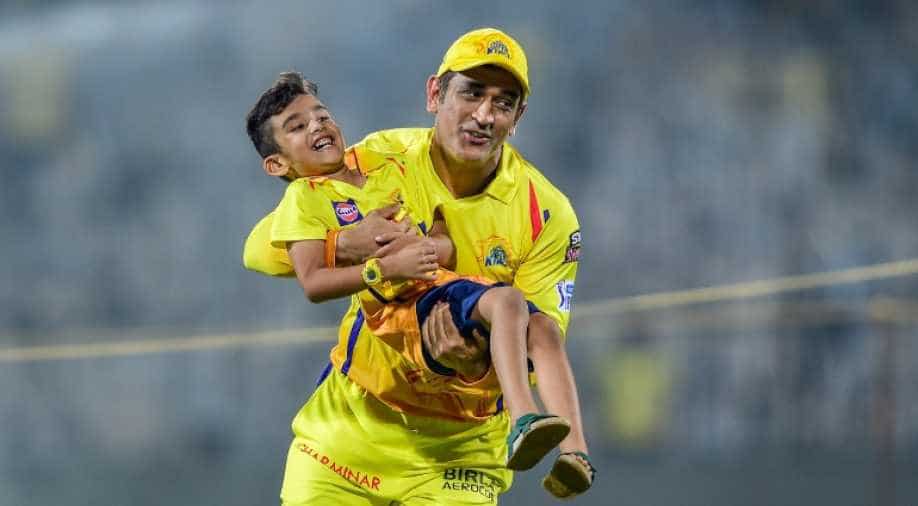 MS Dhoni playing with a son of his teammate Imran Tahir. Photograph:( PTI )

The video is proof that Chennai's skipper MS Dhoni skipper is still a kid, watch.

It's not wrong to call Mahendra Singh Dhoni a 7-year-old kid as he joined Imran Tahir and Shane Watson's sons for a playful sprint at the Chepauk stadium after Chennai's 22-run win over Punjab in an Indian Premier League match on Saturday.

After the match, a video went viral in which Jr Tahir and Jr Watson were getting ready for a sprint challenge assisted by their fathers and from nowhere, the 37-year-old entered the frame and started running with the kids.

He later lifted Tahir's son and run back to the finishing line.

The video was posted by the franchise's official account with the caption, "Jr. #ParasakthiExpress and Jr. Watto having a sprint face-off and a lightning joins them! Priceless!"

It is well-known that India's two-time World Cup-winning skipper is comfortable around kids and his videos with daughter Ziva Dhoni often go viral.

Recently he was talking with daughter Ziva in six different languages, watch.

In the match, defending 160 for three, Chennai restricted Punjab to 138 for 5 despite half-centuries from KL Rahul (55) and Sarfaraz Khan (67).

The visitors scored at a low pace and required to score 26 off the last over, bowled by IPL debutant Scott Kuggeleijn. The Kiwi paceman had no trouble defending those runs and also dismissed Sarfaraz.