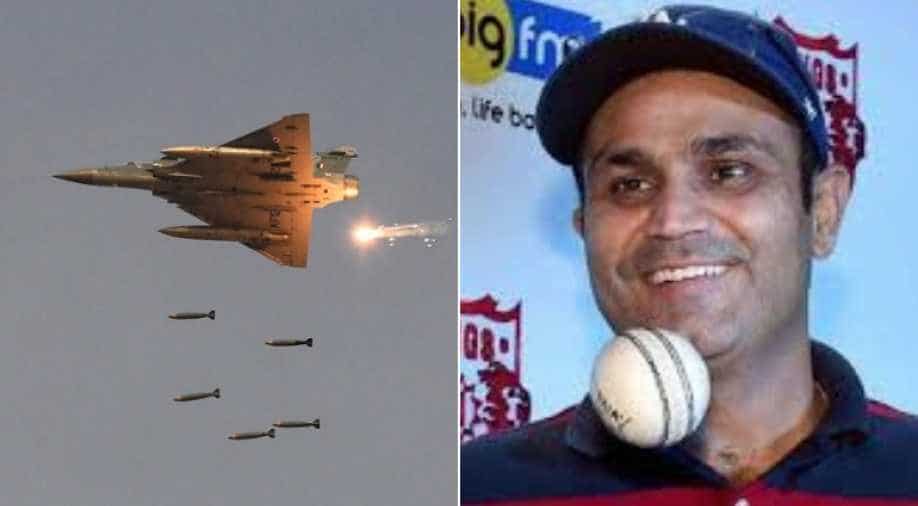 With a hashtag #SudharJaaoWarnaSudhaarDenge, Sehwag tweeted, 'The boys have played really well.'

India carried out early morning airstrikes on terror launch pads in Pakistan and is believed to have destroyed terrorist targets.

From cricket fraternity, former cricketers Virender Sehwag, Gautam Gambhir were the first ones to respond to the strikes conducted by the Indian Air Force.

With a hashtag #SudharJaaoWarnaSudhaarDenge, Sehwag tweeted, "The boys have played really well."

Tendulkar also hailed Indian Air Force saying, "Our niceness should never be comprehended as our weakness. I salute the IAF, Jai Hind."

In pics: How Indian Air Force carried out air strikes on terror pads across LoC

The air strikes were non-military pre-emptive action was targeted specifically at JeM camp and the aircrafts took off from Gwalior in batches.

Before the air strikes, surveillance was done by Heron drones, which was taken over from a secret airfield.

Presentation of air strikes was given by senior IAF Offical to NSA and PM.

Here is what Sehwag tweeted:

Our niceness should never be comprehended as our weakness.
I salute the IAF, Jai Hind 🇮🇳

The strikes were carried out at Muzaffarabad, Chakoti and Balakot - the terror hub in Pakistan.

Balakot, a town in Pakistan's Khyber-Pakhtunkhwa province, is about 50km from the Line of Control and known among the intelligence agencies as "epicentre of jihad". It and has been on the radar of American forces for a long time.

Analysts allege that many Pakistan-based terror groups have their base and training camps in the area. Terror group Jaish-e-Mohammed chose Balakot for its base after Taliban were routed in the year 2001. Jaish-supported Al-Rehman Trust is also active in the area, according to intelligence agencies.