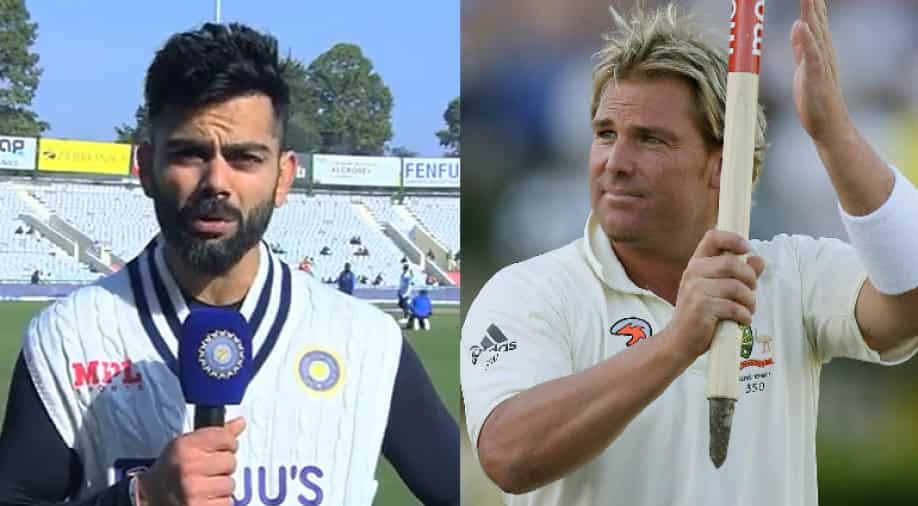 Virat Kohli paid a heartfelt tribute to the legendary Shane Warne and hailed him as the greatest spinner to have played the game after his shock demise on Friday (March 04).

The entire cricket fraternity was left in shock as the tragic news of Australian cricket icon Shane Warne emerged on Friday (March 04). Warne passed away after suffering from a suspected heart attack in Thailand. Tributes have been pouring in from all corners for the Aussie great, who is regarded as one of the best spinners to have graced the game.

Former India captain Virat Kohli also paid a heartfelt tribute to Warne ahead of the start of Day 2's play between India and Sri Lanka in the ongoing first Test between the two sides at the PCA Stadium in Mohali. Kohli said he was still in 'disbelief and shock' while hailing Warner as the greatest spinner of all time.

Recalling the time he spent with Warne, Kohli said the Aussie great was an honest man who would bring charisma to every conversation he had and liked to live his life king size. BCCI shared a video of Kohli paying tribute to Warne ahead of the 2nd day's play in the Mohali Test between India and Sri Lanka.

"Got the sad news last night about the demise of Shane Warne last night. Out of nowhere to be honest. We keep doing what we do and we think life is all about what we are involved in. I realise very quickly life is too unpredictable and fickle and need to be grateful for all the moments we are alive. Passing at age of 52 is totally unexpected, went far too early. I stand here in disbelief and shock as I got to know him off the field too. He brought charisma to every conversation he was part and with that, I could understand what he brought on the field as well," said Kohli.

"Just a honest honest man, any conversation you could see he spoke too clearly, knew exactly what he was saying. He lived life king-size. Very grateful to have known him, for me the greatest spinner to play the game. I hope we can put the right perspective about life and just be grateful god has blessed us with to be alive and healthy. My deepest condolences to their family and they have all our support. God bless his soul," he added.

"Life is fickle and unpredictable. I stand here in disbelief and shock."@imVkohli pays his tributes to Shane Warne. pic.twitter.com/jwN1qYRDxj

Warne, who made his international debut for Australia in 1992, went on to become one of the best spinners in the world. He troubled the best of batters with his spin wizardry and won hearts of millions with his skills and performances. Warne is the second-highest wicket-taker of all time in Test cricket with a staggering 708 wickets in 145 matches.