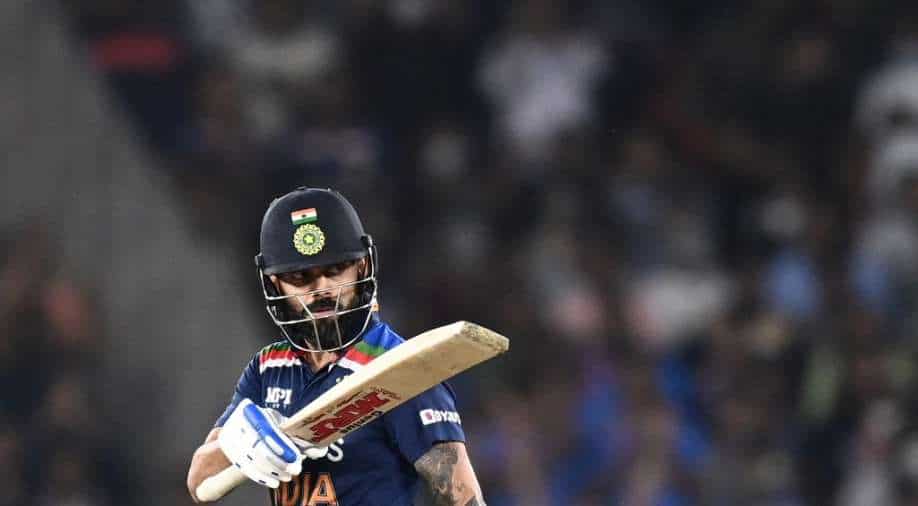 Virat Kohli explains why he will be opening for RCB in IPL 2021 Photograph:( AFP )

Virat Kohli on Monday explained why he will be opening the batting for Royal Challengers Bangalore in the upcoming Indian Premier League (IPL) 2021. In IPL 2016, Kohli had opened the batting for RCB and ended up having his best-ever season in the T20 tournament. He had amassed 973 runs in 16 games at an average of 81.08 and a strike rate of 152.03. However, since then the swashbuckling batsman has continued to bat at number three in the cash-rich tournament.

Virat Kohli on Monday explained why he will be opening the batting for Royal Challengers Bangalore in the upcoming Indian Premier League (IPL) 2021. Kohli had opened the batting with Rohit Sharma in the fifth T20I against England in Ahmedabad as the duo stitched a 94-run partnership to put India in a strong position. India went on to defeat England to seal the T20I series 3-2 and the Men in Blue would be hoping to carry the good run of form in the ODIs against England, commencing Tuesday in Pune.

In IPL 2016, Kohli had opened the batting for RCB and ended up having his best-ever season in the T20 tournament. He had amassed 973 runs in 16 games at an average of 81.08 and a strike rate of 152.03. However, since then the swashbuckling batsman has continued to bat at number three in the cash-rich tournament.

"Firstly, the combination that plays on the field, the selectors do not have any role in that just like the management does not have any role in who gets selected. Secondly, as Rohit mentioned it was a strategic move, but we did enjoy batting together in the last T20I. We did enjoy our partnership and we saw the effects of us batting together and knowing what we can do to the opposition if we bat throughout. It is not a guarantee that it is going to be continued in the future," said Virat during a virtual press conference on Monday.

Kohli further said that he will open in IPL to understand his role as an opener while opening up a slot for in-form batsman Suryakumar Yadav.

"I am going to open in the IPL to keep all options open. I have batted at three, four and now I need to understand my role as an opener which I have done successfully in the past in T20 cricket so that I provide an option to open up a slot for someone like Surya, if he can continue to bat like that, I should be open to playing any kind of role that the team requires me to. We will have a conversation about this when we get closer to the T20 World Cup. It would be interesting to see how I go about my job as an opener in the IPL," the Indian skipper added.

When asked whether ODIs have come out of nowhere in the year where the side is preparing for the T20 World Cup, Kohli said: "Look, it is a difficult one. Scheduling is something that is not in our control. For us, in international games, every game is important and every game has value. It is an opportunity to represent your team and for us, that remains the sole focus. Yes, along the way as I have said in the past, scheduling and workload are something everyone will be very aware of. In today's day and age, you never know when restrictions are going to come in and even in the future, you might have to continue playing in bubbles.

"It is important to consider how much cricket you are playing, it is just not about the physical side of things, it is mental side as well. Players need to be spoken to and consulted with all around. Otherwise, it is going to be a case of whoever can last plays and if not, some other player replaces that person and I do not think it is healthy for cricket system and culture going forward," said Kohli.

ALSO READ: 'It all depends on...': Eoin Morgan provides update on Jofra Archer's chances of playing in IPL 2021

After winning the Test and T20I series, India would be hoping to win the three-ODI series against world champions England in Pune starting from Tuesday (March 23).