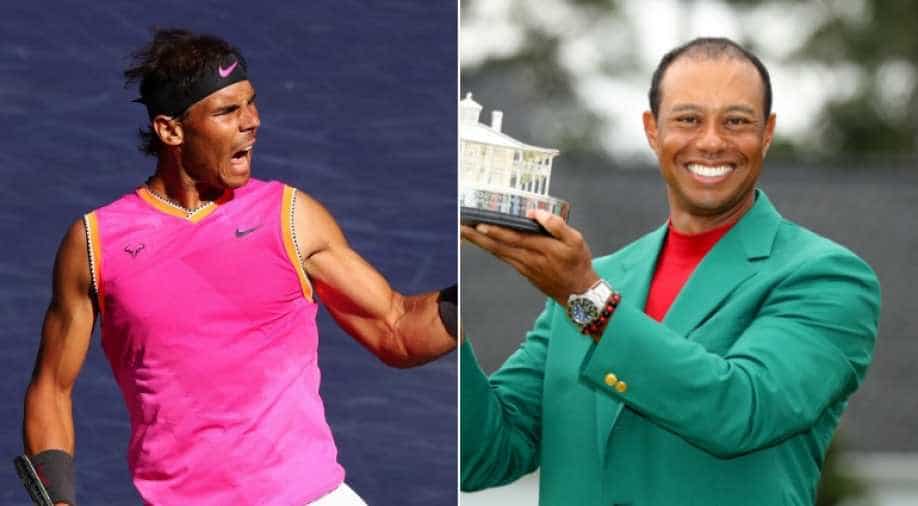 On Woods' terrific victory, Nadal said, 'He's probably my favourite sportsman in the world since a long time ago'

Former world number one and Spain's tennis star Rafael Nadal said that golfer Tiger Woods is his favourite sportsperson. Rafa admires the hard work that Tiger Woods put in to return to the top of golf by winning the 2019 Masters on Sunday.

Woods capped his remarkable comeback from injuries and personal problems with a victory at the Masters. He captured the green jacket by one stroke for his 15th major title -- but the first since 2008.

Woods had not won at Augusta National since 2005.

He underwent spinal fusion in 2017 fearing chronic back pain would deny him life's simple joys but it simply came out wrong when he fired a final-round two-under par 70 to finish on 13-under 275 for a one-shot victory.

On Woods' terrific victory, Nadal said, "He's probably my favourite sportsman in the world since a long time ago. I am a big fan of his."

Nadal further added, "There have been some tough years for him and you know I can't be more happy about the victory of yesterday."

"If you imagine all the processes and hard work he had to do to be back on a golf course. It's so difficult - all the things that he did. And finally win a grand slam again, in Augusta, probably his favourite one, means everything."

Rafael Nadal looked ahead to the Monte Carlo Masters and the defending champion said every tournament was like a comeback at the moment, as a result of his troublesome injury history.