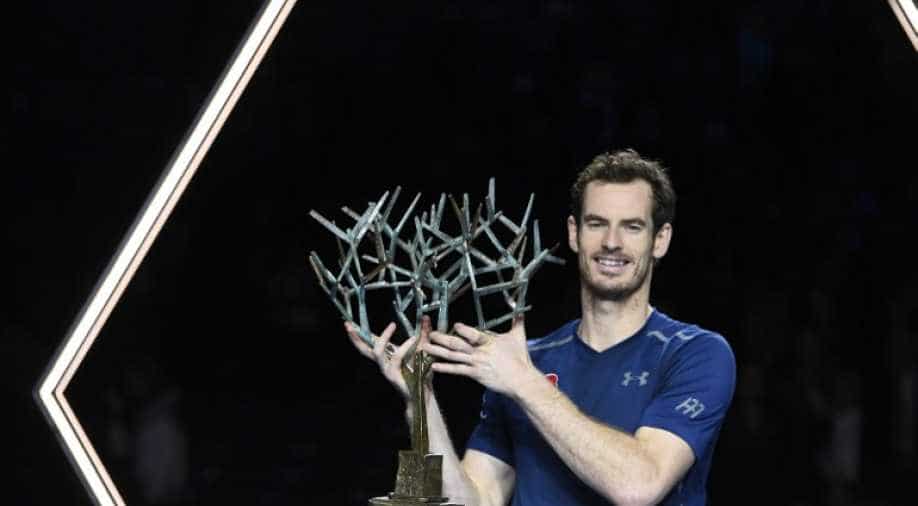 Murray will be the top seed at the season-ending ATP World Tour finals at the O2 Arena in London from November 13-20. Photograph:( AFP )

Andy Murray celebrated his impending rise to the world number one ranking with a 6-3 6-7(4) 6-4 victory against John Isner to claim his maiden Paris Masters title and his eighth tournament win of the season on Sunday.

The Briton, who will take over from Novak Djokovic at the top of the ATP rankings on Monday, survived a barrage of aces against the towering American to win his 14th career Masters tournament.

Murray will be the top seed at the season-ending ATP World Tour finals at the O2 Arena in London from Nov. 13-20.

"Thanks to my team and my family who were commenting back home. This has been an incredible journey for me to get to the top of the rankings, I could have not done it without all of you," said Murray.

Isner said of Murray: "He's the guy that everyone is looking up to right now. And he's been at the top of the game for so long. Whether it's two, three, four in the world, everyone knows how hard he works and how dedicated he is.

The double Olympic champion entered the contest with a 7-0 record against Isner and his recent form, which had helped him to win six of his eight previous tournaments since losing the French Open final, suggested he would have the upper hand.

Murray, who now has 43 titles to his name, broke in the sixth game on his first opportunity when Isner sent a backhand long.

The American, who served a total of 18 aces, had two chances to break back in the following game as he opened up a 40-15 lead.

Murray saved the first with a routine volley after managing to lob his 2.08-metre opponent, and forced Isner to bury a backhand into the net on the second.

He bagged the opening set with an unreturned serve having made only four unforced errors.

Isner earned three break points thanks to a splendid drop shot followed by a forehand winner. Murray saved them all, the last one with a second-serve ace, and staved off another one to stay level.

In the tiebreak, Isner went 4-2 up when Murray double faulted, and the American closed it out with a booming forehand winner to send the contest into a decider.

Both players looked clumsy but it was Murray who played a tighter game in the end, ending the contest on his first match point when Isner netted a backhand volley.