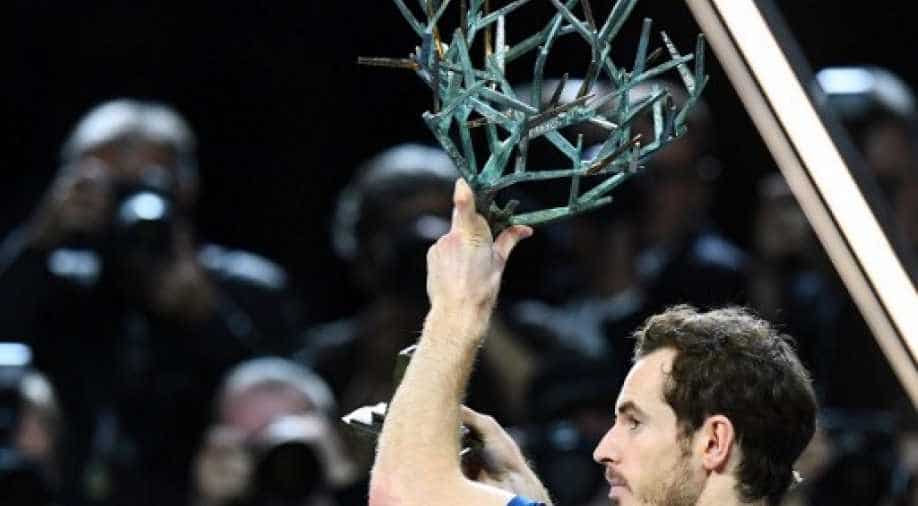 Britain's Andy Murray poses with his trophy on the podium after winning the final tennis match against USA's John Isner at the ATP World Tour Masters 1000 indoor tournament in Paris on November 6, 2016. Photograph:( AFP )

Newly-crowned World No 1 Andy Murray has been drawn in a group with Stan Wawrinka, Kei Nishikori and Marin Cilic for next week's season-ending ATP World Tour Finals in London.

On Monday, Murray ended Novak Djokovic's 122-week reign to become the second-oldest player since John Newcombe in 1974 to debut at
World No 1.

The Briton will start his group round-robin matches against Croatian Cilic at the O2 Arena on November 14,Sport24 reported.In contrast, things look slightly easier for current second-ranked Djokovic as he has been placed with tournament debutants Gael Monfils, Dominic Thiem and Canada's Milos Raonic.

What makes the Serbian the likely group winner is the fact that he had never suffered a defeat to any of the players in his group before with a 23-0 record.Djokovic will kick off his campaign with a clash against Austria's Thiem.

Murray is currently 405-point ahead Djokovic in the race to finish the year ranked in the top spot, with 1,500 points up for grabs for a champion who goes undefeated at the World Tour Finals in London.