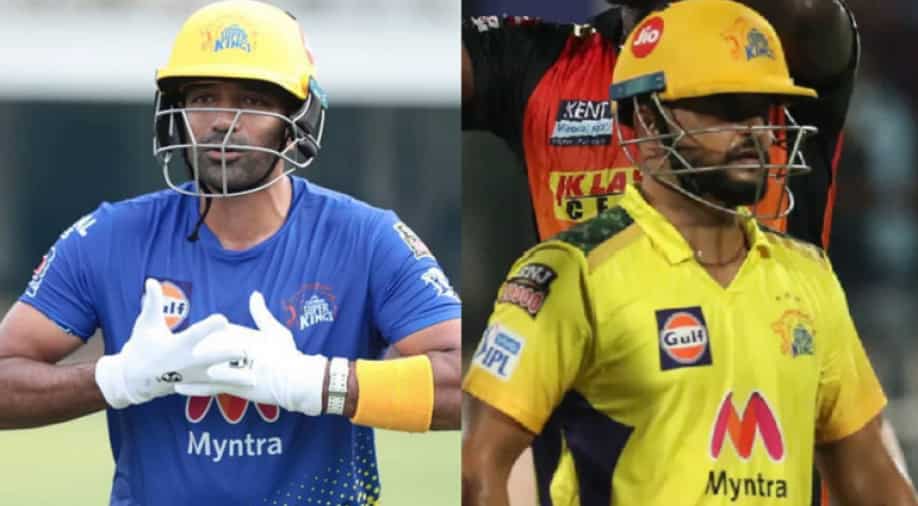 Suresh Raina or Robin Uthappa - Who should CSK play in the middle-order? | Photo - CSK/IPL | Photograph:( Others )

Former India opener Gautam Gambhir has revealed his choice between Robin Uthappa and Suresh Raina on who should CSK persist with in the upcoming IPL 2021 playoffs.

Former India opener Gautam Gambhir believes Chennai Super Kings (CSK) should persist with senior batsman Robin Uthappa in the middle-order in the upcoming IPL 2021 playoffs. CSK will take on table-toppers Delhi Capitals (DC) in Qualifier 1 on Sunday (October 10). Ahead of the all-important game, Gambhir revealed his choice between Suresh Raina and Uthappa in the middle-order for CSK.

CSK's middle-order remains a huge concern for the Men in Yellow ahead of the playoffs. While captain MS Dhoni himself has struggled to score runs consistently, the likes of Raina and Uthappa haven't fired either. Raina was dropped from the playing XI in CSK's last two games against DC and Punjab Kings respectively as Uthappa took his place in the XI.

However, Uthappa too failed to impress and could only manage 21 runs in two outings for the Dhoni-led side. However, Gambhir believes CSK should pick Uthappa over Raina in the playing XI in the knockout stages. The former Kolkata Knight Riders skipper believes Uthappa will come good if he is persisted with.

"Uthappa. Although he hasn't grabbed his opportunities, I still believe you got to persist with Robin Uthappa and he will come good," said Gambhir.

However, former New Zealand and Royal Challengers Bangalore captain Daniel Vettori said he will continue to back Raina. Vettori believes Raina is an experienced campaigner and is used to the pressure of playing in big matches.

"I will always go to Raina. I think he is that sort of player who is used to these situations and big games and could come off in the pivotal moment," he said.

Raina has so far played 12 matches this season and has managed to score only 160 runs in what has been a disastrous campaign for CSK's highest run-getter in IPL history.