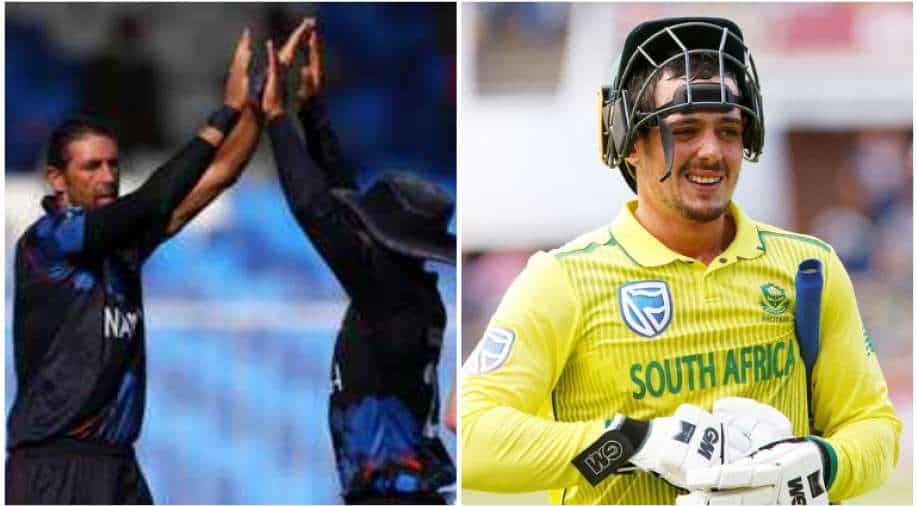 With Quinton De Kock not taking a knee in South Africa's clash vs West Indies in the T20 Word Cup, former SA international and Namibia's David Wiese has reacted to the QDK-BLM row.

Quinton de Kock made heads turn when he opted out of South Africa's T20 World Cup 2021 clash versus West Indies, on Tuesday afternoon (October 26) at Dubai International Cricket Stadium, Dubai. While the players took a united stance by taking a knee in the fight against racism in the Black Lives Matter (BLM) movement, De Kock's absence shocked the cricketing fraternity.

While Temba Bavuma-led Proteas went onto defeat the defending champions West Indies with ease, despite no De Kock in the line-up, the wicketkeeper-batsman's absence made heads turn and hogged the headlines. The swashbuckling left-hander has finally released a statement on his absence and apologised for not taking a knee.

Recently, David Wiese -- a former South African international who is now representing Namibia in Pool B of T20 WC -- reacted to QDK's BLM row. During a virtual press conference ahead of the upcoming Abu Dhabi T10 League, Wiese shared his thoughts on QDK's BLM row and told while responding to www.wionnews.com, "Look, I think Quinky has made a press release today. He has given his reasons. You got to respect that as a player regarding what he feels about it. I think he has put everything to bed and everyone knows why he did what he did. For me the most important thing is that whatever you decide, you need to decide as a team. Stand in unity behind racism. Whether it is feeling strongly about taking a knee or like the Pakistan team stood and held their hand on their badge. What you are doing to show your support to anti-racism, you just have to do it as a team, in a unified front. That's how I see things."

In a release, QDK shared his take and said, "I would like to start by saying sorry to my teammates, and the fans back home.  I never ever wanted to make this a Quinton issue. I understand the importance of standing against racism, and I also understand the responsibility of us as players to set an example.

"If me taking a knee helps to educate others, and makes the lives of others better, I am more than happy to do so. I did not, in any way, mean to disrespect anyone by not playing against West Indies, especially the West Indian team themselves. Maybe some people don't understand that we were just hit with this on Tuesday morning, on the way to a game.

"I am deeply sorry for all the hurt, confusion and anger that I have caused. I was quiet on this very important issue until now. But I feel I have to explain myself a little bit. For those who don't know, I come from a mixed race family. My half-sisters are Coloured and my step mom is Black. For me, Black lives have mattered since I was born. Not just because there was an international movement.

"The rights and equality of all people is more important than any individual. I was raised to understand that we all have rights, and they are important. I felt like my rights were taken away when I was told what we had to do in the way that we were told.

"Since our chat with the board last night, which was very emotional, I think we all have a better understanding of their intentions as well. I wish this had happened sooner, because what happened on match day could have been avoided."