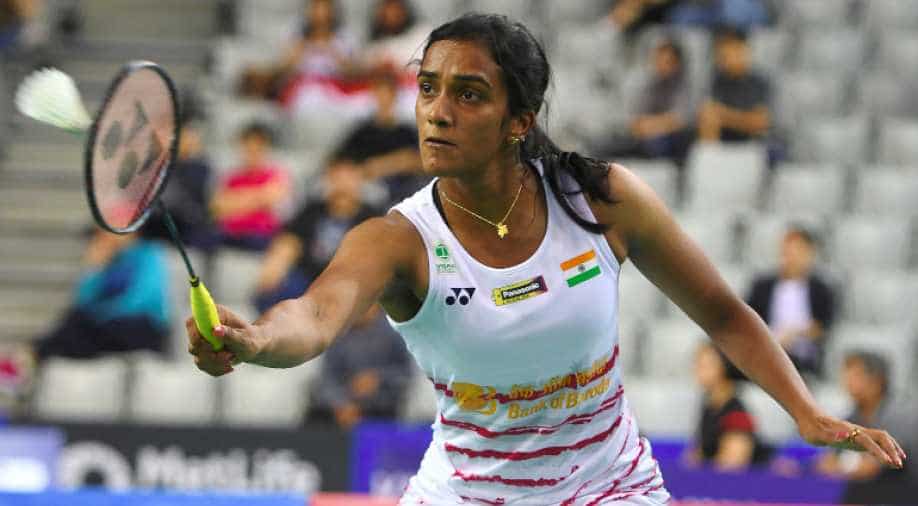 Olympic silver medallist P V Sindhu progressed to the quarterfinals of the All England Championship with a hard-fought win over Thailand's Nitchaon Jindapol in women's singles, here.

The world No 3 Indian recovered from a mid-way slump to overcome the Thai shuttler 21-13 13-21 21-18 in a match which lasted an hour and seven minutes.

With 2013 champion Ratchanok Inthanon crashing out in the opening round, the onus was on Jindapol to go deep in the tournament and she did produce some superb strokes but Sindhu was always a step ahead.

Coming into the contest, Sindhu had a 2-1 head-to-head record against Jindapol, who is enjoying a career-best rank of 11.

The Indian kept the shuttle in play, pushing Jindapol to the corners and returning the shuttles with immaculate ease early on.

In the first game, the duo split the initial six points before Sindhu jumped to a 7-3 lead after winning a long rally. Sindhu played a brilliant backhand return to move to 8-3 and eventually entered the interval with another precise stroke at the back of the court.

After the breather, Sindhu moved to a 15-7 lead and kept piling on the misery on the Thai who kept hitting the net and wide to bleed points.

A body smash took Jindapol to double figures but she couldn't go far as Sindhu grabbed a massive game point advantage with a deceptive return at 20-13. Jindapol then hit long to hand the game to the Indian.

In the second game, Jindapol anticipated better and seemed more attacking in her approach and quickly opened up a 7-3 lead with a straight smash.

Sindhu hit wide and also miscued a backhand return. Jindapol used a reverse slice and dominated the rally next to zoom to a 11-3 advantage at the break.

Jindapol played an exceptional wristy deceptive return at the net and was all pumped up as she added more power in her strokes. Sindhu too looked to step up the pace of the rallies and narrowed the gap to 10-14.

Jindapol enjoyed a lucky net chord and Sindhu sent one long as the Thai shuttler lead 17-10 with another superb return.

Sindhu closed the gap to 13-17 with three straight points with some precise returns. A bad judgement and two successive wide shots from Sindhu gave Jindapol seven game points and she sealed it with a smash to roar back into the contest.

Sindhu looked more focused in the decider as she pumped herself with each point, moving to a 3-0 lead.

Jindapol exploited Sindhu's weak backhand but made a few unforced errors as Sindhu moved to 8-5. Jindapol kept the pressure on and narrowed down the lead to 7-8.

With an animated Indian coach P Gopichand constantly passing on advices from the sidelines, Sindhu produced a precise return to get another point but Jindapol clawed back at 9-9 after wrong footing the Indian. Sindhu held a slender 11-9 lead at the interval after Jindapol hit wide on both side of the flank.

Jindapol erased the deficit quickly after enjoying another lucky net chord and grabbed the lead when Sindhu couldn't put away a return.

Jindapol moved to a 15-12 lead after Sindhu erred in her cross court return. The Thai unleashed a precise return to gain another point but she found the tape next.

Sindhu produced an onrushing return at the back and then unleashed a couple of roaring smashes to make it 16-16.

Both missed the line next as it was 18-18. Sindhu then pounced on a chance at the net to grab lead and then gained the match point when the Thai went to net. Jindapol netted again as Sindhu sighed a relief.

Last night, H S Prannoy dished out a gritty performance to outwit eighth-seeded Chou Tien Chen 9-21 21-18 21-18 to enter the men's singles second round. The world no. 16 Prannoy will face Indonesia's Tommy Sugiarto next.

Pranaav Jerry Chopra and N Sikki Reddy defeated German combo of Marvin Emil Seidel and Linda Efler 21-19 21-13 in the opening round to set up a clash with second seeded Chinese pair of Wang Yilyu and Huang Dongping.