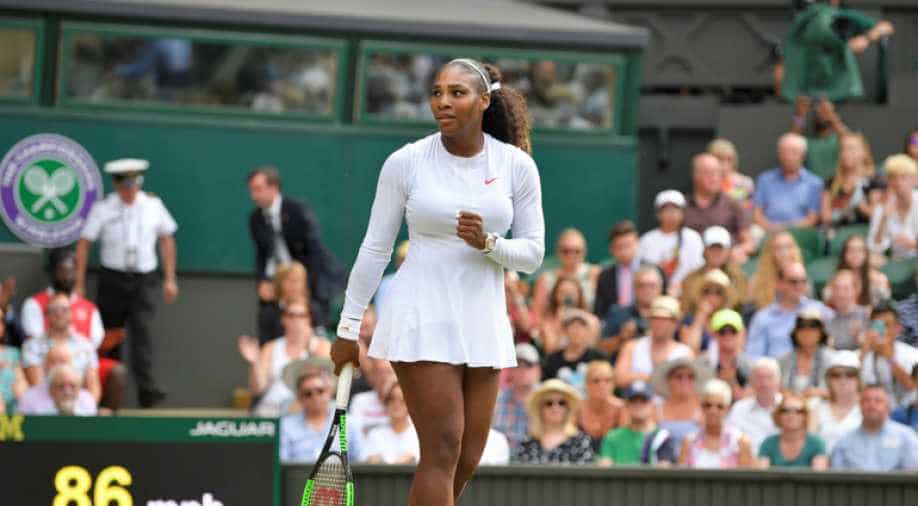 Williams won the most recent of her Grand Slam titles at the 2017 Australian Open when she was in the early stages of her pregnancy, which led to her taking a year off from competition

Serena Williams will bring her quest for a record-equalling 24th Grand Slam title to Wimbledon next week where she will try to shake off a nagging knee injury and show the tennis world that her window of opportunity is still open.

Williams has been stuck on 23 Grand Slam titles, one behind the all-time record held by Margaret Court, for over two years and has shown little evidence of late that she will be able to snap that drought at the All England Club.

"As long as she's playing, she's going to be a threat to win anything," former world number one John McEnroe told a conference call.

"But it's just now there's more things that can go wrong, I suppose, like more days where she might not have it and other days where players won't give in as easily. So that just makes it more difficult," McEnroe said.

The 37-year-old American's time on court has been limited to a handful of matches since the Australian Open in January due in part to a knee injury that kept her from competing in a tune-up event ahead of Wimbledon, where action begins on July 1.

After losing in the third round at the French Open, Williams did not exactly sound her confident self when asked if she would have enough time to get in optimal shape for Wimbledon, where she is a seven-times winner.

"I hope so. I'm still working on it and working on getting there. So I think it will be, I think it be enough time. We'll see, but I definitely hope so," said Williams.

When Williams was at the peak of her career, she was so far above the competition that she could barrel her way through a Grand Slam draw even if she was having an off day.

But the combination of injury, a limited playing schedule and an increased standard of women's tennis over the past few years have left many to question whether she can again triumph in one of tennis' blue riband events.

Williams won the most recent of her Grand Slam titles at the 2017 Australian Open when she was in the early stages of her pregnancy, which led to her taking a year off from competition.

She came back with a bang in 2018 and despite not playing at her best managed to reach the final at both Wimbledon and the US Open.

Healthy legs are key to any player's game but perhaps even more vital for someone like Williams who relies heavily on her physicality and court coverage to set up big shots.

Williams has been unable to deliver her trademark big serves on a consistent basis of late but will likely take comfort in the friendly confines of the All England Club given she is most effective on grass.

But unlike in her prime, Williams' rivals know she is not the same player she once was and do not walk onto the court nearly as intimated as they once were when facing one of the game's all-time greats.

"There's so many things that may be going against Serena, and she thrives on that, and she loves that, and that's when she comes through," said Evert.

"I would have said in January, if there was any Grand Slam she was going to win, it would probably be Wimbledon ... and if her serve is on, she's going to be tough to beat," added Evert.