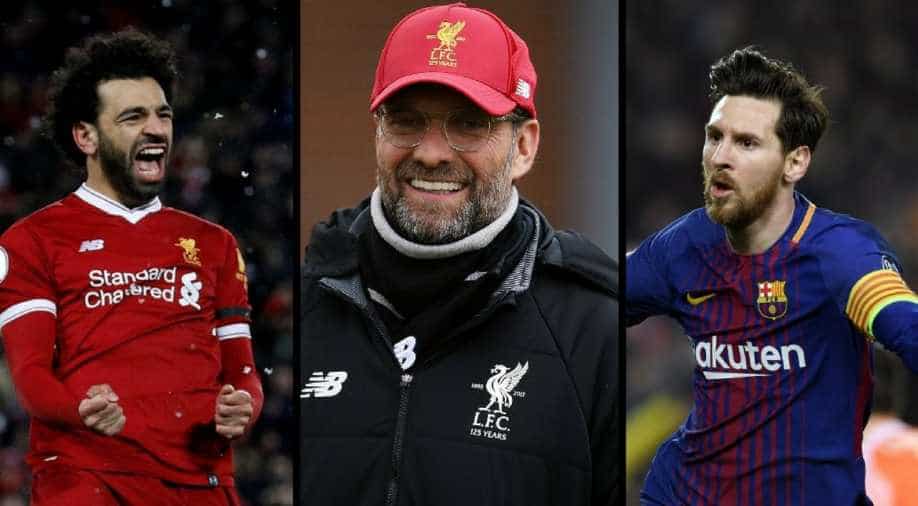 Liverpool manager Jurgen Klopp believes the Egyptian is on his way to one day becoming the best player in the world. Photograph:( Twitter )

Liverpool forward Mohamed Salah is on his way to reaching the elite level of Lionel Messi but has no interest in being compared to the prodigious Barcelona striker, manager Juergen Klopp has said.

Salah, 25, struck four goals in Liverpool's 5-0 thrashing of Watford that lifted them back into third place in the Premier League on Saturday.

The Egypt international moved to 28 league goals, four goals clear of Tottenham Hotspur striker Harry Kane in the race for the Golden Boot. He has 36 in all competitions this season, the most by a Liverpool player in a debut campaign for the club.

Asked about the similarities in Salah and Messi's style of play, Klopp said: "Mo is on the way, that's good. I don't think that Mo or anybody else wants to be compared with Lionel Messi.

"He (Messi) has been doing what he's been doing for what feels like 20 years or so... the last player I know who had the same influence on a team performance was Diego Maradona."

The last player to score four goals in a Liverpool shirt was Messi's current strike partner at Barcelona Luis Suarez.

The Uruguay international netted a first-half hat-trick before adding another after the break in a 5-1 league victory over Norwich City in 2013.

"Mo is on a fantastic way... but how it always is in life, if you have the skills then you have to show it constantly," Klopp added.

"His consistency is good for us. He helps us a lot, the boys love playing with him, he loves playing with them, so it's good."

Liverpool moved to 63 points from 31 games, two behind second-placed Manchester United who have a game in hand.