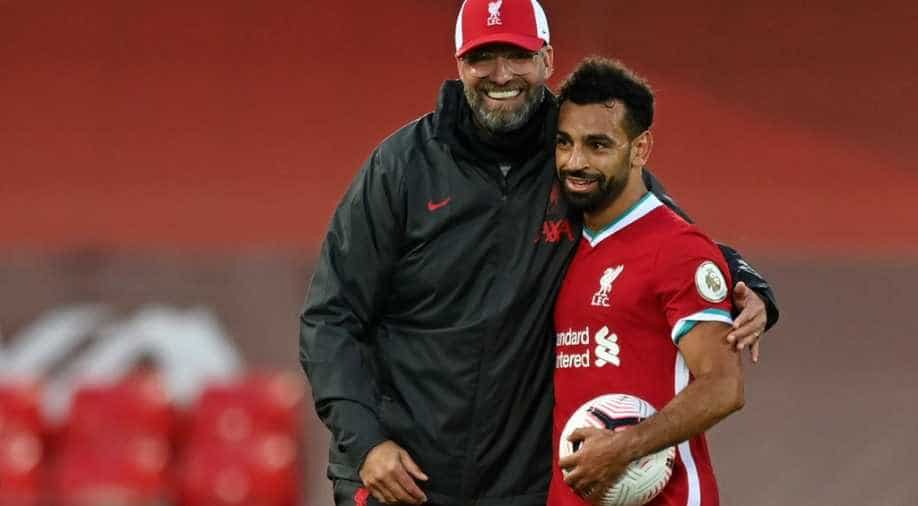 Mohamed Salah's hat-trick saved Liverpool from an opening day stumble as the defending Premier League champions edged Leeds 4-3 on Saturday, while Arsenal had a much more comfortable start against newly-promoted opposition with a 3-0 win at Fulham.

Just 48 days after last season's delayed conclusion, the Premier League returned with a bang as Liverpool and Leeds, on their return to the top-flight after a 16-year absence, served up a feast of goals to open the 2020-21 campaign.

Jurgen Klopp's side cruised to a first league title in 30 years last season, but Liverpool looked more like the wide open side of the German's early days in charge at Anfield as three times Leeds came from behind.

Salah won a fourth-minute penalty when his shot hit Leeds debutant Robin Koch on his outstretched arm and he dispatched the spot-kick himself.

Leeds fashioned a stunning equaliser in the 12th minute when on-loan Manchester City midfielder Jack Harrison cut past Trent Alexander-Arnold and Joe Gomez before drilling a superb low finish into the bottom corner.

Leeds equalised again in the 30th minute when Van Dijk made a hash of a flicked attempt to clear and Patrick Bamford pounced to guide his shot past Alisson Becker.

A remarkable game produced more drama as Salah struck again three minutes later with a thunderous drive into the roof of the net.

Leeds equalised for a third time when Mateusz Klich made a well-timed run to meet Helder Costa's pass with a composed finish in the 66th minute.

But Liverpool won it in the 88th minute when Leeds' record signing Rodrigo tripped Fabinho and Salah slotted in the penalty, leaving Klopp to sum up the feelings of both teams when he mouthed "wow" at the final whistle.

"Leeds are special. I said it before the game and in the game everybody saw it obviously," said Klopp admiringly of Bielsa's men.

"I’m completely fine with the game. Offensively, it was good; and defensively, we can improve and we will improve."

- Confident Arsenal -
At Craven Cottage, Arsenal hit the ground running with the kind of confident display that has become their hallmark since Mikel Arteta took charge.

After winning the FA Cup in his debut campaign, Arteta's next task is to return Arsenal to the Champions League next season and the Spaniard promised more good news with captain Aubameyang getting ever closer to agreeing a new contract.

"I'm really positive we are going to get it done very soon and hopefully in the next few days you will get some news," Arteta told BT Sport.

Two of Newcastle's new signings ensured they got off to a flying start after an unsettling few months off the field with a 2-0 win at West Ham.

Despite a proposed Saudi-backed takeover of the club not going through, the Magpies do appear to have recruited well in the transfer market.

England international Callum Wilson got his first goal for the club early in the second half before Jeff Hendrick also marked his debut with a stunning strike to secure all three points for Steve Bruce's men.

Wilfried Zaha's goal was enough to earn Crystal Palace a 1-0 win over Southampton at Selhurst Park.