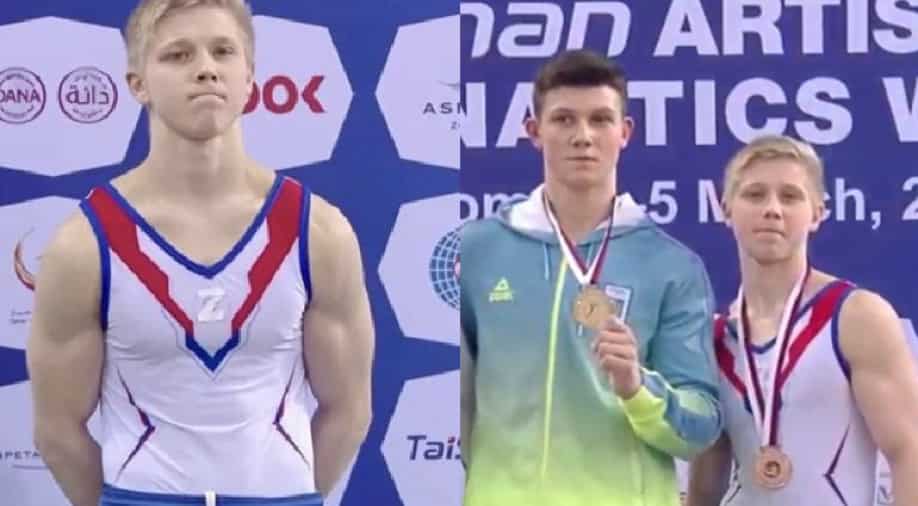 Russian gymnast Ivan Kuliak has been banned for one year. Photograph:( Twitter )

Russian gymnast Ivan Kuliak has been banned for one year for sporting a war insignia on the podium during a World Cup event in Doha in March this year.

A Russian gymnast who sported an insignia linked to his country's invasion of Ukraine on a medal podium has been banned for one year, a disciplinary panel said.

Ivan Kuliak's singlet had the letter 'Z' prominently placed as he stood next to Ukraine's Kovtun Illia, the gold medallist at a World Cup event in Doha in March.

The 'Z' has been seen daubed on Russian tanks and vehicles in Ukraine and has come to symbolise support for the invasion.

"Mr Kuliak is not allowed to participate in any FIG-sanctioned event or competition organised by an affiliated FIG member federation for one year as of the date of this decision," GEF said.

Kuliak must also return his bronze medal and prize money of 500 Swiss francs ($500). He has 21 days to appeal against the punishment.

It had already been decided that all Russian and Belarusian gymnasts will be banned from future competitions.

"If the protective measures keeping Russian athletes from competing are still in place on 17 May 2023, the ban shall continue and expire six months after the removal of said measures," GEF said.