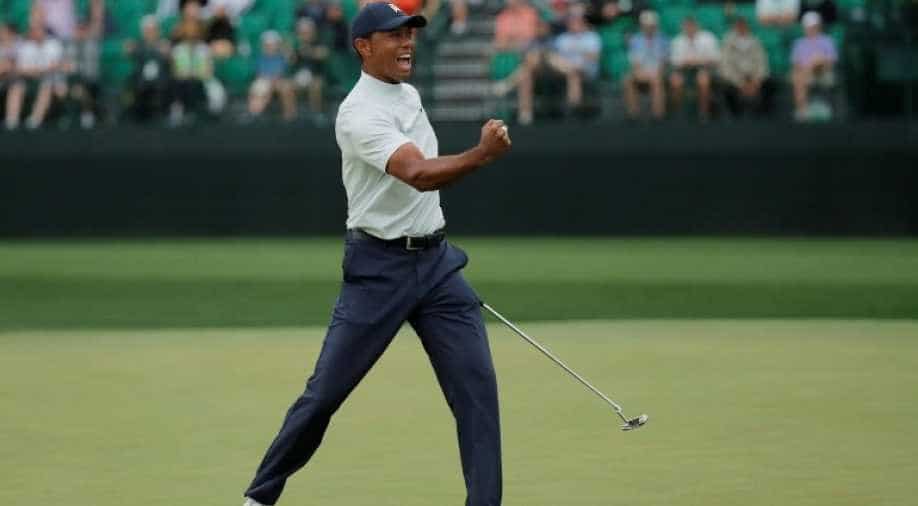 Woods brought the roars back to the famed venue with a brilliant four-under-par 68.

Major winners Francesco Molinari, Louis Oosthuizen, Brooks Koepka, Jason Day and Adam Scott shared top spot at the Masters on Friday at the end of the second round, but it was Tiger Woods who commanded the spotlight once again at Augusta National.

Woods brought the roars back to the famed venue with a brilliant four-under-par 68, putting himself on track for a fifth Green Jacket. At six-under-par 138, the American is just one shot off the leaders heading into 'moving day'.

After an ordinary outward nine featuring three birdies offset by a pair of bogeys, Woods embarked on one of his trademark charges, carding three birdies after the turn to shoot up the leaderboard.

"I feel like I played my own way back into the tournament," said Woods. "I was just very patient today, felt very good to be out there doing what I was doing.

"This is now three straight majors that I've been in the mix and so it's good stuff."

The stage is now set for an extraordinary weekend as Woods attempts to slip into his first Green Jacket since 2005 and claim his first major since 2008.

However, nothing less than a 15th major victory will quell talk of an unfulfilled comeback.

It would also reignite his pursuit of Jack Nicklaus's record haul of 18 majors.

On Friday, it was like old times as the 43-year-old turned up the buzz with each shot, the roars echoing across Augusta National when Woods rolled in a long birdie putt at 15 and continued until he walked off the 18th where his birdie putt clung to the lip leaving him a tap-in par.

The Woods show overshadowed everything else.

Any other time, a hobbled Day might have been the story after getting up off the deck to shoot five-under 67.

Barely able to walk after throwing out his back bending over to kiss his daughter on the practice range on Thursday, the battling Australian somehow turned in a near flawless scorecard, with six birdies and a single bogey.

"Pain is a funny thing, it goes up and down, and everybody's pain threshold is different," said Day, the 2015 PGA Championship winner.

"Someone that is in a lot of pain might feel something totally different compared to me, so it's hard.

"Every day I feel like I wake up with some sort of aches, you know, and I think you just kind of learn to live with it and you just go along the way."

Italian Molinari carded an error-free 67 for his best round in eight Masters that put the British Open champion in contention for a Green Jacket to go along with the Claret Jug he hoisted last year.

Koepka, who had shared a one-shot overnight lead, also deserved applause, staging a back nine recovery after a stumbling start to the second round.

After a flawless opening round, Koepka had two bogeys and a double in his first six holes on Friday but the twice U.S. Open champion was able to regain his composure, steadying himself with six straight pars from the ninth.

It also looked like old times for Australian Scott, the 2013 champion, who moved up the leaderboard with a four-under 68.

British Open winner Oosthuizen also joined the party with a 68, while world number two Dustin Johnson returned a two-under 70 who to join Woods at six-under.

There was drama up and down the leaderboard.

Patrick Reed kept his Green Jacket defence alive, making the cut with a two-under 70 but Spain's Sergio Garcia, the 2017 champion, made an early exit for the second straight year after returning a 73.

World number one Justin Rose also headed for the exit after he bogeyed the final two holes to miss the cut by one shot.