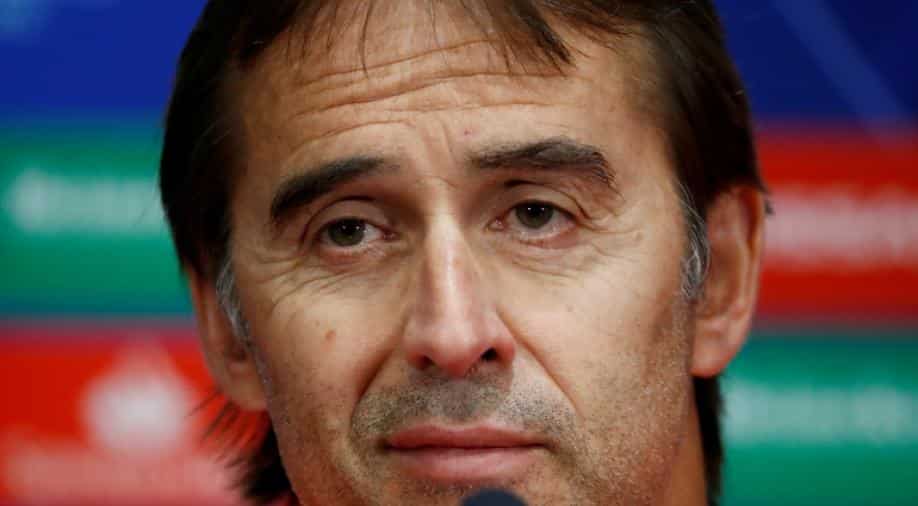 Lopetegui pointed out that despite his side's poor form, they are locked on 14 points with Barcelona, who lead the standings on goal difference.

Real Madrid coach Julen Lopetegui said on Friday he is not worried about his position amid the club's worst goal drought in over a decade, pointing out that his side are joint top of La Liga.

Lopetegui, who signed for Real in June and was immediately sacked as Spain coach on the eve of the World Cup, has come in for heavy criticism after the team's 1-0 Champions League loss at CSKA Moscow, which followed a goalless draw with Atletico Madrid and a humbling 3-0 defeat at Sevilla in La Liga.

"We don't analyse what people might think," Lopetegui told a news conference when asked if his job was in danger.

"We are working every day on trying to improve. The club's objectives are still intact and nothing more.

"You have to respect all opinions but it's logical that at a club like Real Madrid you are always under heavy examination. But we will be judged by what we achieve by the end of the season."

Real, who are away to Alaves in La Liga on Saturday, have gone three games without scoring for the first time since the 2006/07 season, when they ended up winning the La Liga title on the final day of the campaign.

Lopetegui pointed out that despite his side's poor form, they are locked on 14 points with Barcelona, who lead the standings on goal difference.

"You are under maximum pressure at Real Madrid but we are fully focused," added Lopetegui.

"We are on the same number of points as the league leaders and I have no doubt that in the Champions League we'll return to the form we showed against AS Roma (who Real beat 3-0 in their opening game).

"Right now the focus is on Alaves, a team that are unbeaten in six games and who will oblige us to put in a huge performance if we want to win."