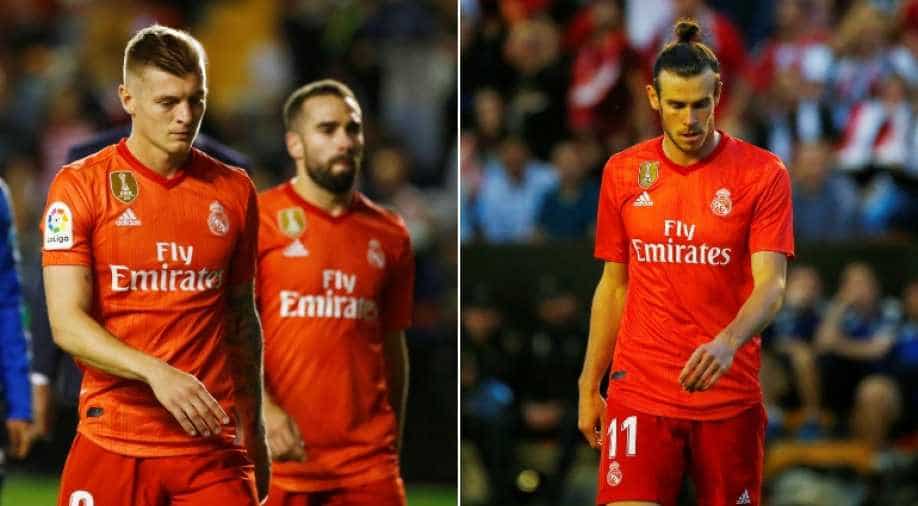 It was Rayo's first win over their illustrious neighbours since 1997, when Fabio Capello was in charge of Madrid

A toothless and haggard Real Madrid slumped to a humiliating 10th Liga defeat of the season on Sunday as they lost 1-0 at struggling neighbours Rayo Vallecano, who began the weekend bottom of the standings but dominated the game.

The only goal came when Adri Embarba sent Real goalkeeper Thibaut Courtois the wrong way with a penalty midway through the first half, giving Rayo a deserved lead after an ambitious start in front of a typically raucous home crowd.

The spot-kick, given for a foul by Jesus Vallejo on Javi Guerra, was awarded following a VAR review after the referee had waved play on and Gareth Bale had narrowly failed to score as Madrid counter-attacked.

Real later had a goal from Mariano ruled out for a clear offside, one of the rare occasions in the game in which Zinedine Zidane's side troubled the hosts, who looked far likelier to score again than concede a goal to Madrid's toothless attack.

"We did nothing today on any level, from the first minute until the last," Zidane told reporters.

"Sometimes you are not able to score but today we didn't even create chances, we did nothing well. We have to all be angry with our performance. I am angry because we gave an awful image of ourselves."

Madrid are third in the standings on 65 points after 35 games, nine behind second-placed Atletico Madrid and 18 adrift of champions Barcelona, and look destined to finish third for the second season in a row.

Rayo moved above SD Huesca to 19th on 31 points and are still six away from escaping the relegation zone, but their supporters showed they believe they can still avoid the drop, chanting "Yes we can" when the final whistle blew.

It was Rayo's first win over their illustrious neighbours since 1997, when Fabio Capello was in charge of Madrid.

The build up to the game was dominated by Real's refusal to allow Rayo's top scorer Raul de Tomas, who is on loan from Zidane's side and prevented from facing his parent club due to a clause in his contract, to turn out for the home side.

Real were also without their top scorer as Karim Benzema, who had netted 10 times in his last eight games, was missing with a hamstring injury, while captain Sergio Ramos was also out.

Madrid's attack was lead by the inexperienced Mariano and out-of-form Bale and, despite the huge gap in riches between the two sides, Rayo always looked in control and were well worthy of the victory.

"We didn't suffer much but that shouldn't take anything away from us," said Rayo coach Paco Jemez, who had lost his previous eight games against Madrid in his previous spell with the club, including a harrowing 10-2 defeat in 2015.

"We played a spectacular game in every aspect. I dreamt once that I would never beat Real Madrid in my entire life but now we have done it I can die happy."