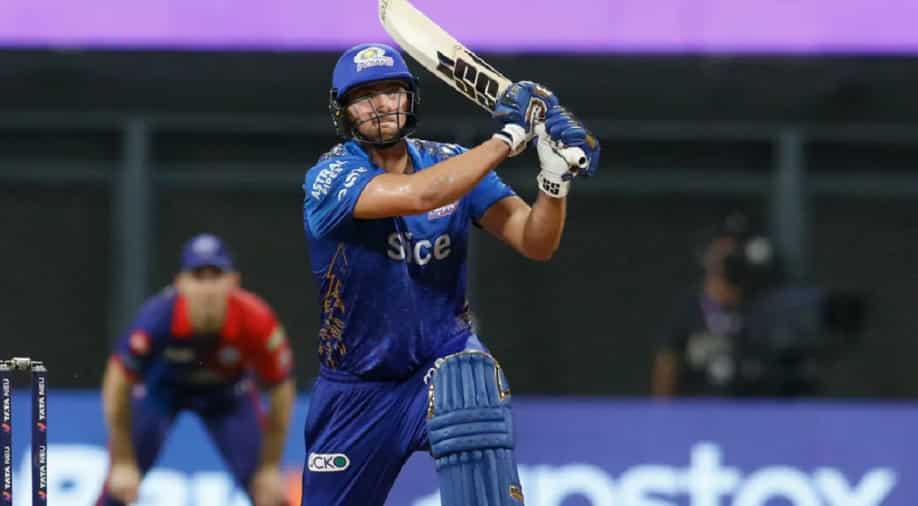 Mumbai Indians (MI) thrashed Delhi Capitals (DC) by five wickets to do Royal Challengers Bangalore (RCB) a favour by helping them qualify for the playoffs of the ongoing Indian Premier League (IPL) 2022. DC had headed into the clash with their fate resting in their own hands as they needed a win against MI to make it to the playoffs.

However, the Rishabh Pant-led side failed to defend the total of 159 runs which saw RCB pip them to finish in the top four with the help of MI's victory. Australian all-rounder Tim David was the hero of MI's victory as he played a sensational cameo of 11-ball 34 to help Rohit Sharma & Co. end their season with a win.

Mumbai Indians were reeling at 95/3 inside 15 overs when David walked in to bat against Delhi Capitals at the Wankhede Stadium on Sunday. He wasted little time in settling down and launched an all-out attack against the DC bowlers. The explosive right-handed smashed 4 sixes and 2 fours en route to his 34-run knock and took the game away from Delhi Capitals.

RCB took to social media to pay tribute to David after his brilliant knock set up MI's win over DC and helped them qualify for the playoffs. "We love you @timdavid8 You’re doing great. More power to you," RCB wrote in a tweet with a picture of David in an RCB jersey.

David was part of the Royal Challengers Bangalore squad in the IPL before being roped in by Mumbai Indians this season. The all-rounder showcased his skills and talent with the bat after failing to cement his spot in the side following a few failures at the start of the season.

David scored 186 runs in 8 matches for MI in IPL 2022 striking at an impressive 216.27 and averaging over 37. Mumbai Indians brought an end to their disappointing campaign with a win but will hope to improve their performances next season.