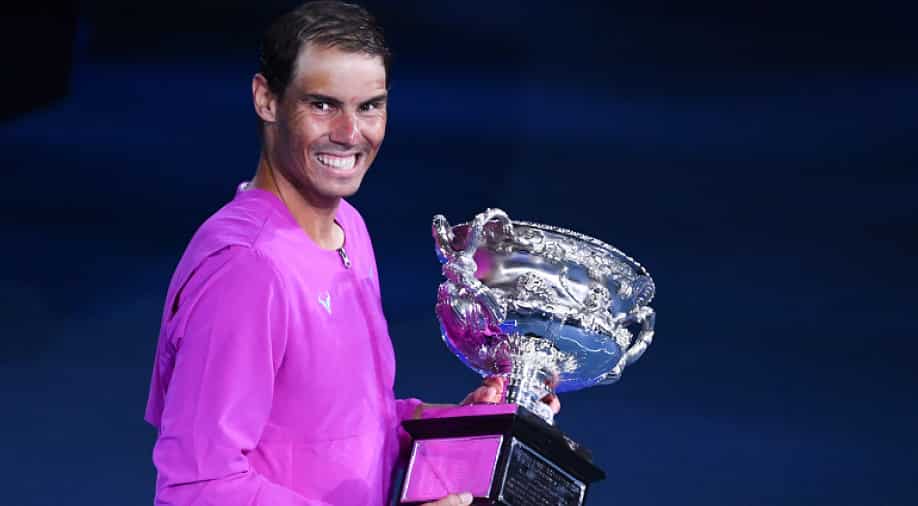 Rafael Nadal defeated 2nd seed Daniil Medvedev in a thrilling final to lift the Australian Open 2022 men's singles title on Sunday. With the historic win, Nadal has now gone past Novak Djokovic and Roger Federer clinching his 21st men's singles Grand Slam crown - the most by any player in history.

Rafael Nadal staged an incredible comeback from two set down to beat 2nd seed Daniil Medvedev in an epic final to create history at the Australian Open 2022 on Sunday (January 30). Nadal defeated the Russian 2-6 6-7(5) 6-4 6-4 7-5 in a riveting final to win a record 21st men's singles Grand Slam title and go past arch-rivals Roger Federer and Novak Djokovic.

Nadal, who had lost on his last four final appearances in the Australian Open, stunned Medvedev despite losing the first two sets back-to-back. Medvedev started off in brilliant fashion and made light work of the Spaniard in the first set to clinch it 6-2 inside 42 minutes. However, Nadal fund his mojo back and bounced back strongly in the second.

Nadal raced to a 4-1 lead after winning a 40-shot rally in the second set and looked all but set to clinch it before Medvedev fought back. The Russian forced the set into a tie-breaker as he came from 1-4 down to take the second set 6-7(5). Medvedev had all but buried Nadal it seemed with his incredible defence and sublime skills. However, the Spaniard proved why he should never be written off.

Nadal was left with an uphill task, a mountain to climb after losing the first two sets straight with not many expecting him to come back from 2 sets down and pull off an incredible victory. Nadal managed to take the 3rd set 6-4 after being tied at 4-4 and managed to hang in there in the dramatic summit clash.

Much to Medvedev's frustration and Nadal's delight, the Spaniard raced to a 4-2 lead in the fourth set and saved two break points to go 5-3 up. He eventually won the set 6-4 to restore parity at 2-2 and force the final into a deciding fifth set. The final set once again saw the two tennis stars fight tooth and nail and give their all on the court before Nadal emerged on top to script history at Melbourne Park.

Nadal brought an end to his 13-year long wait for an Australian Open title having last defeated Federer in the final Down Under in 2009. Returning from a knee injury after a gap of six months, Nadal had been written off by many at the start of the Australian Open 2022 but the absence of Federer due to an injury and Djokovic having to pull out due to his unvaccinated status paved the way for his glorious comeback.

Nadal had missed the Wimbledon due to fatigue and the US Open due to his foot injury last year. He had earlier revealed he almost thought of giving up tennis at one stage and felt blessed just to be playing at the Australian Open this year. However, the 35-year-old showcased remarkable grit and resilience in the final to go the distance in the tournament and realise his dream of a 21st Grand Slam crown.