Premier League set to use VAR from next season 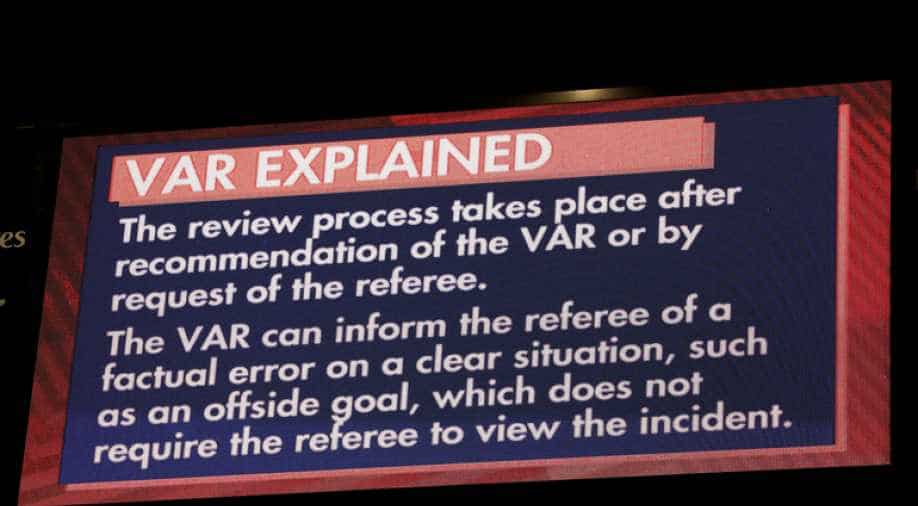 VAR is explained on a big screen at the Emirates Stadium in London. Photograph:( Reuters )

The top leagues in Spain, Italy and Germany are already using VAR and the technology was used at the World Cup in Russia this year.

Premier League clubs have agreed in principle to introduce video assistant referees (VAR) from the start of next season, they said on Thursday.

The top leagues in Spain, Italy and Germany are already using VAR, which allows disputed incidents to be reviewed with the use of video replays, and the technology was used at the World Cup in Russia this year.

The English clubs were provided with an update on this season's VAR trials, with key examples of its use in the FA Cup and League Cup discussed in detail.

"The League will now formally make a request to the International Football Association Board and (world body) FIFA to use VAR next season," the Premier League said in a statement.

Southampton striker Charlie Austin demanded the introduction of VAR after his goal was disallowed by referee Simon Hooper, who deemed Maya Yoshida to have interfered with the ball from an offside position.

The English top-flight was one of the first leagues to adopt goal-line technology in 2013 but had voted unanimously against VAR ahead of the 2018-19 campaign, instead agreeing to continue testing the system.

The initial trials in English domestic cup matches last season received mixed reviews, with fans often complaining that they were being left in the dark when decisions were made.

"The Premier League's non-live testing programme will remain in place for the rest of this season, with a continued emphasis on those Saturday afternoons which have several matches being played concurrently," the League added.

The VAR system uses a match official who monitors video footage of the game for incidents that the on-pitch referee and his assistant referees might have missed, such as determining goals, red cards, penalties and cases of mistaken identity.

How VAR decisions are communicated to the fans in the stadiums will also be addressed, the league confirmed.

The use of VAR was hailed as a success by FIFA after the World Cup in Russia, which saw 455 incidents checked in 64 matches at an average of 7.1 per game. Those incidents led to 20 reviews, with 17 decisions changed as a result.

Former Premier League referee Mark Halsey believes the time is right for the league to use the technology, which should help the officials to make correct decisions during match-defining moments.

"I think it is a good thing. I know a lot of people are against it but we've got to embrace it now and move forward," he told the BBC.

"We've seen this season a number of incidences that have been called wrong, especially this weekend when there were a number of goals ruled out when they shouldn't have been.

"I think as long as we get the training and education right, and we get the right personnel, that's the most important thing for me."

VAR will also be used in the Champions League from next season.