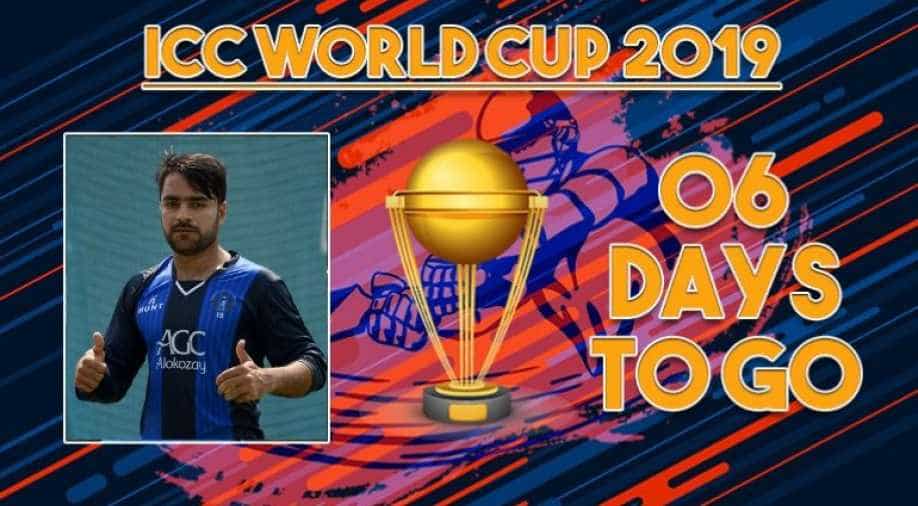 It is not only his wicket-taking that makes Rashid such a threat but his ability to contain batsmen as they look to pour on runs in the latter stages of an innings, a skill he illustrated in this year's Indian Premier League

Leg spinner Rashid Khan is already on his way to becoming Afghanistan's first sporting superstar and the 20-year-old is determined his first World Cup will be remembered for his country achieving something rather than just taking part.

The world's best Twenty20 bowler, Rashid was just 18 when he exploded onto the world stage with the fourth best haul in one-day international history, taking seven for 18 to help Afghanistan beat West Indies in St Lucia.

Rashid was already an ODI veteran by then, having made his debut soon after his 17th birthday, and has since taken his career figures to 125 wickets at an average of 15.33 in 59 matches -- good enough for third spot in the ICC rankings.

His batting is good enough -- 798 runs at an average of 22.80 -- that he is number two in the world all-rounder rankings in ODIs but it his leg spin, most notably his devastating quick wrong 'un, that sets him apart.

"Rashid Khan is a once-in-a-lifetime bowler," Australia's Adam Zampa purred after a recent net session with the Afghan.

"I tried doing it but they were just slipping out, I was like 'this bloke is unbelievable'."

It is not only his wicket-taking that makes Rashid such a threat but his ability to contain batsmen as they look to pour on runs in the latter stages of an innings, a skill he illustrated in this year's Indian Premier League.

His teammate and fellow spinner Mujeeb Ur Rahman is the only active bowler more economical than Rashid in ODIs, even if much of their careers have been spent playing against teams from the lower end of the rankings.

Rashid did experience victories over Sri Lanka and Bangladesh as well as a tie with a weakened India side when Afghanistan finished second at the Asian Cup last year but he knows the World Cup will be another step up.

Debutants without him at the last World Cup in 2015, Afghanistan secured just one victory over Scotland and were humbled by eventual champions Australia, who they meet in their opener at this year's edition on June 1 in Bristol.

They will continue to be an inspiration to their compatriots in their war-ravaged country whatever they do, of course, but Rashid thinks it is high time Afghanistan turned their undoubted talent into some kind of success.

"We have the skills, everything," Rashid told Adelaide's Advertiser newspaper earlier this month.

"We need to show the world we are not only good on paper ... We didn't do well in the past under pressure but I think this World Cup is about beating big teams and play good cricket like we did in the Asia Cup.

"It is time for us to deliver something."