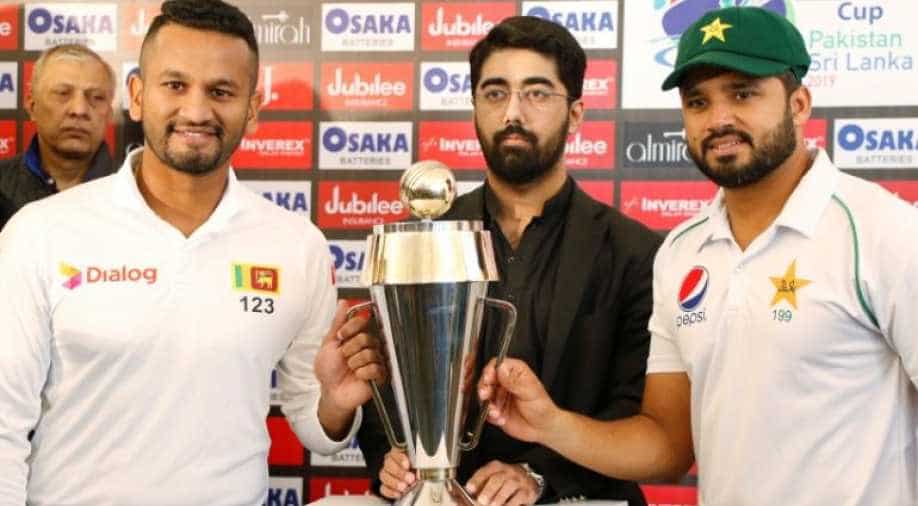 Test cricket returns to Pakistan for the first time in a decade today as Sri Lanka lock horns with the hosts in Rawalpindi for the opening game of the two-match series.

The visiting Sri Lankan team were given a warm reception on their arrival in Islamabad on Monday - with the Pakistan cricket board keen to mark this series as a watershed moment.

The two captains posed with the trophy for the series - which is officially part of the ICC world test championships - in Rawalpindi before going through the paces with their respective sides.

The hosts are keen to bounce back from a disastrous tour of Australia in which they suffered big innings defeats in both matches. In fact, they have not won a Test series since beating Australia in Dubai last year.

Pakistan will find a familiar face in the opposition camp - that of their former coach Mickey Arthur who is now in charge of the Sri Lankans.

The Islanders last played Tests in august in a home series against new Zealand that ended in a 1-1 draw. Before that, they had stunned South Africa in South Africa before the world cup.

Sri Lanka captain Dimuth Karunaratne won the toss and opted to bat under overcast skies in the opening test against hosts Pakistan.

Experienced middle-order batsman Dinesh Chandimal is back in the Sri Lanka side for the first time since losing the captaincy after their defeat by Australia in Canberra in February.

Sri Lanka included one frontline spinner in Dilruwan Perera, dropped opening batsman Lahiru Thirimanne and brought in Oshada Fernando, who played the last of his two tests in February against South Africa.

Opening batsman Abid Ali will make his debut in place of Imam-ul-Haq while there was no place for experienced leg-spinner Yasir Shah.