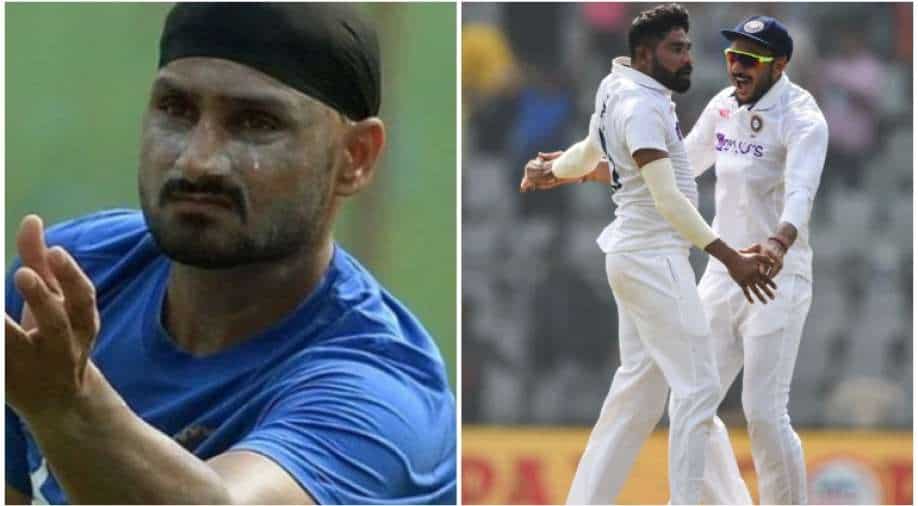 Harbhajan names who could be India's No. 1 bowler in future Photograph:( AFP )

Veteran off-spinner Harbhajan Singh revealed who can be India's No. 1 bowler in the near future ahead of the South Africa series.

Virat Kohli-led Team India have plenty of quality bowlers who have stood tall and delivered the goods for the national side, especially in the Test format. India have maintained their dominant run in Tests for quite sometime and maximum credit needs to be given to their current crop of bowlers.

At present, India have senior pacers in the form of Ishant Sharma, Mohammed Shami, Jasprit Bumrah along with spin duo R Ashwin and Ravindra Jadeja. However, the likes of Axar Patel, Shardul Thakur, Mohammed Siraj and Jayant Yadav have also made a mark in their given chances. Hence, all eyes are on them ahead of India's upcoming three-match Test series versus South Africa in the African nation, from December 26.

Veteran off-spinner Harbhajan Singh opined on India's bowling combination for the SA series and lavished praise on Siraj. Stating that Shami and Bumrah will be automatic picks along with Ashwin and Jadeja, Bhajji has his eyes on Siraj and stated that he will be India's  No. 1 bowler in near future.

"Mohammed Shami, Jasprit Bumrah, and Mohammed Siraj... what an outstanding bowler. In the time to come, he will be India's No. 1 bowler. With him, I feel Shardul Thakur will return because in South Africa you will require a seamer who can bat as well. Along with them, we shall certainly see R Ashwin and Ravindra Jadeja playing and perhaps, Axar Patel could also be seen operating with them," Harbhajan said on his YouTube channel.

For the unversed, Siraj has had a dream start to his Test career. He ended as India's leading wicket-taker in the 2020/21 Border-Gavaskar Trophy versus Australia (with 13 scalps) and also returned with 14 wickets in the four Tests versus England in the United Kingdom. He featured in the second and final Test versus New Zealand recently, where he ended with 3 for 19 in NZ's first essay.

So far, Siraj has accounted for 33 wickets in 10 Tests, at an average of 27.69, and is expected to continue his inspiring run in South Africa.

The three-match Test series versus the Proteas is set to commence on December 26 at Centurion, followed by the remaining two Tests.